This article is a stub. You can help the Anabaptistwiki by expanding it.

Create new articles that tell stories about the Anabaptists of Kanisa la Mennonite Tanzania and insert links to those stories here. Click here to learn more about stories.

A: SHIRATI. I: The first Worship. On Sunday. June 10, the missionaries and their four helpers from Mwanza sat together in front of the bandas where they were camping for service. The next Sunday five locals joined them, for missionaries had been inviting workmen and everyone who stopped to great them. The sukuma helpers introduce several Swahili hymns. Elam Stauffer (Missionary) taught the English chorus, “Come to Jesus” and his wife, Elizabeth, presented each person with a small picture card.

II. Helping the Sick. One day a workman complained of sickness, and another had hurt himself on the job. Ruth Mosemann treated both of them promptly, drawing on her training in the treatment of simple illness and her supply of medicines. Soon sick people were coming each day. This small ministry from the kitchen door, a “good Samaritan” response to need, gave birth to the large ministries to follow. It helped build good relation in the community.

III. The Opening of school. The school began on October 1, 1934, four months after the opening of the station. Pastor Mosemann was in charge, and Zedekia Kisare and Koja Migire were teachers. Each morning from seven to ten o’clock they taught children and workmen in reading, writing, arithmetic, and Bible. Each afternoon Mosemann and Miss Ford instructed the teachers in teaching methods and Bible knowledge. The teaching goal was to enable people to read the Bible. During the time, there was only New testament available in Luo, and Old testament in Swahili.

V. The second baptism service. On may 3, 1936, even believers were baptized and eight were received on confession faith.

B. BUKIROBA Clinton and Maybell Ferster and Elama Stauffer (Western Missionaries) moved from Shirati On December 4, 1935 to Bukiroba to plant the Church. They open =ed leadership training school where by classes for men was based on Biblical: New Testament and Old testament, leadership methods, and church history while for women (wives) classes was on Bible, sewing, health, and care of children. ALL students were comefrome Shirati: Zedekia and Susana kisare, Yakobo and Eliseba Agwanda, Daniel and Susana Opanga, Samuel and Esta Ngoga, Thadayo and Julia Makori, and Zephania and Rusabella Migire. The first baptsm was In October 1937 and TimoteMagoti was the first to be baptized.

C. MUGANGO In August 1935 Stauffer and Ferster had chosen to plant a church at Mugango but their application wasn’t accepted. During the time, there was another church planted called Africa Inland Mission (AIM). Later, the AIM decided to cancel their church and join with Tanganyika Mennonite Church. Therefore, Mennonite in Mugango had only duties of registered members from AIM to Mennonite and to teach them about Mennonite faith. There were eight congregation of total of 41 members had been recorded.

D. BUMANGI In May 1937 Clinton and Maybell Ferster and Clyde and Shenk went to plant a church at Bumangi. The first baptism was in 1940: Zakaria Magigi Mahuka, Daniel Z. Mahuka, Samson M. Nyanduga, and Lea Jona commited themselves as Jesus followers and to be accountable as brothers and sister.

E. NYABASI. The last station for missionaries in Tanganyika (Tanzania) was Nyabasi on January 1, 1940 as their sixth year of work.

The church grew, but there were significant culture differences that influenced the way Tanzanians interacted with the church. The creation of churches, schools, hospitals, and community development characterized the early years of mission[4]. The emergence of the East African Revival movement in 1942 had a profound influence on Tanzanians and missionaries alike, calling all to repentance and the breaking down of barriers[5]. By 1950, four Tanzanian pastors were ordained and in 1967 Zedekia Kisare was chosen as the first Tanzanian Mennonite Bishop[6]. The Mennonite Theological College of Eastern Africa, jointly run with Kenyan Mennonites, began in 1962 and continues today[7].

KMT currently is largely self-sustaining and embedded in key areas in the country. It is now made up of ten Dioceses.[8]. KMT DIOCESE INFORMATION

KMT’s role is to coordinate and facilitate church activities and involvement in all dioceses. KMT has eight dioceses, each led by a Bishop. The following table summarizes the names of the diocese, their headquarters and Bishop:

[The following comments were contributed by Jumanne Magiri, General Secretary of KMT on April 2011]

1. Globalization has significantly changed the way KMT perceives and describes the Anabaptist theology

2. Church needs as an institution are much larger that the resources available

3. There is a growing number of elderly people in the church who need special theological and spiritual support

4. Anabaptist doctrine material are not readily available not only in the national church but in the congregations as well

5. Well apart from the constitution restriction, the church (KMT) does not ordain women in ministry (deaconry, pastoral, or bishophood).

6. Church offering or better stewardship is not as it should be for any viable church.

[The following comments were contributed by Jumanne Magiri, General Secretary of KMT on April 2011]

1. We are revising our constitution and system management tools.

2. Evangelisation is the backbone of our survival in the years to come.

4. Higher Education investment which includes both secular and theology.

6. Of course address all crosscutting issues like environment, gender, Diaspora and food security.

[perhaps someone could add birth/death dates for those who are deceased and brief biographical descriptions for any individual that you have information about (e.g, where they lived,how they served the church, their significant contributions, etc]

A lot of characters ordained and non-ordained, from within and without Tanzania, have contributed immensely to the present state of the Tanzanian Mennonite Church (KMT) and her institutions. The truth is neither space nor time can suffice a comprehensive list of such people, their profile and detailed account of their individual contributions.

Herein listed, are only few individuals who were entrusted responsibilities at the national level and or beyond:- 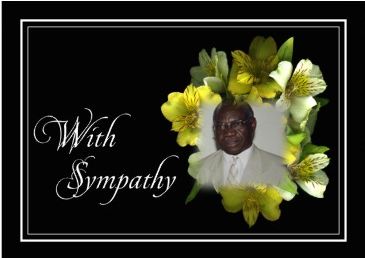 We are sorrowfully informing you of the sudden death (on October 03, 2010) of Pastor Matiku Nyitambe , who at the time of his death was serving as the Tanzanian Mennonite Church (KMT) Executive Council Member. Apart from that by the grace of our LORD Pastor Nyitambe served KMT as the General Secretary between 2001 through August 25, 2007. He worked very conscientiously at various capacities in the Church and the Tanzanian Government. For the church he also served as the Mennonite World Conference Executive Committee member.

The deceased was involved in an accident which took place while driving from his native village (Kirongwe) at the border with Kenya. His body lies in Tarime Hospital morgue and will be transferred to the Musoma Regional mortuary this coming Thursday (October 7th , 2010).

Mrs. Penina Nyitambe who was with him in the vehicle survived with sustained injuries on her head. We praise the LORD that she is now at her residence in Makoko Musoma after being discharged from the hospital in Tarime. We pray for her quick complete recovery and that may the LORD of widows, orphans and the needy grant her comfort. We further pray that the bereaved family continues to be united throughout this time of grief. May the Grace of our LORD Jesus Christ be with us all.

In collaboration with the family members we are working on funeral arrangements. We will keep you updated as more is known about the funeral service. We plan to have a funeral service in Kirongwe a few kilometres North of Shirati after the a bereavement service that will be held in Musoma on the 8th October 2010 at the Kitaji KMT Congregation.

The former Secretary for the Tanzanian Mennonite Church (KMT) Youth Organization well known as Umoja wa Vijana wa Kanisa la Mennonite Tanzania (UVKMT), Deacon Alfayo Wangwe has reported that, following the recent UVKMT – general conference held in Musoma , the following were elected as the new leaders for the organisation at the national level for the coming period of three years from now.

In the same pipeline, we are also been notified by the incumbent KMT general Secretary, Deacon Jumanne Magiri that, on the Friday of 03rd September 2010, the KMT (Church) General Conference shall meet in Musoma for deliberation on different crucial development plans and for the general election of Church Leadership for the coming period of three years.

We ask for your prayers and all results shall be posted herein as soon as we receive them.

Following the KMT General Assembly of 03rd September 2010 the following are the elected Leaders for the next three years.

My appologies for mispelled names (if any).

Annali Smucker compiled much of the information presented here in a student research paper for a spring 2009 Anabaptist History Class at Goshen College.

Retrieved from "https://anabaptistwiki.org/mediawiki/index.php?title=Kanisa_la_Mennonite_Tanzania&oldid=11563"
Categories:
This page was last edited on 26 April 2013, at 23:14.
Privacy policy
About Anabaptistwiki
Disclaimers