A Theology of Suffering (in 1 Peter) 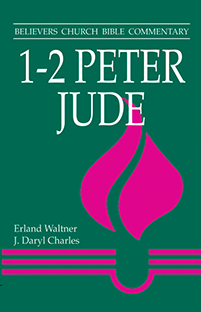 In one perspective, 1 Peter does not offer “a theology of suffering,” yet this theme is inescapably pervasive. It can be seen as the central concern or at least the central setting for its message of hope. In 1 Peter (NRSV), some form of the word suffer appears at least twenty times.

Peter Davids has devoted special attention to a careful review of this theme in 1 Peter. In current usage the word suffer has a wider range of meanings than in 1 Peter. Contemporary dictionary definitions of suffering range from undergoing “pain or grief or damage or disablement” to undergoing “martyrdom” (Davids: 30). In trying to understand the biblical text, we need then to give special attention to the context and meanings of biblical terms.

In reviewing the understandings of suffering in the OT, the NT, and in church history, Davids briefly traces changing “theologies of suffering” having to do with the relation of sin and suffering, the perceived ultimate origin of suffering (from God or Satan), the possible meaning and even the benefits of suffering, and its ultimate end. He pleads correctly that 1 Peter must be read first of all in terms of its own understanding of suffering, not our presuppositions.

Most of the OT associates sin and suffering. Suffering is perceived as a consequence of sin. God is commonly viewed as bringing suffering. Thus suffering is seen either as punishment or at least chastisement designed to bring people back to God. Often such suffering takes place at the hands of enemies, especially enemy nations. The grand exception to this view is in the book of Job, which seeks to break the direct connection between personal sin and human suffering. Job does not portray suffering as a purifying or character-building experience. Satan rather than God becomes the principal agent, though with God’s “permission.”

In The Suffering of God, Fretheim offers another perspective, reinterpreting the OT and tracing how indeed God is also perceived as suffering. God is not only, as some have read it, the one who causes or allows people to suffer. Throughout the OT, God is portrayed as one who suffers because of, with, and for God’s people, anticipating NT perspectives.

In the NT, Jesus also disconnects a direct relationship between sin and suffering (John 9:3; Luke 13:1–5), particularly in the matter of physical health. Moreover, the concept of the innocent or the righteous suffering comes into play and finds its ultimate expression in Jesus as the innocent and even sinless sufferer. Suffering is perceived as a testing of faith (James 1:1–4, 12–15) and as discipline (Heb. 12:2–11). Beyond these perspectives, the concept of vicarious redemptive suffering, drawn especially from Isaiah 53, becomes significant.

In 1 Peter itself, the theme of suffering is pervasive. The particular Greek vocabulary of suffering comes from the paschō cluster of terms rather than thlipsis, “oppression, affliction” (Davids: 31). Of the 42 times paschō appears in the NT, twelve of these are in 1 Peter. It is clearly a dominant word in this epistle, though other expressions for suffering are also used. As indicated above (notes on 1:18–21; 2:21–25; 3:18–22; 4:13ff.), the suffering of Jesus Christ has a most significant role in this epistle.

However, about half the references deal with the suffering endured by the followers of Christ. They suffer trials and the testing of their faith (1:6). They are falsely accused as evildoers (2:12). Some are treated harshly and unjustly by their masters (2:18–20). Some wives have unbelieving husbands (3:1). Believers experience evil or abuse from others (3:9). Former associates blaspheme because the believers have changed their lifestyle (4:4). More profoundly, they share in Christ’s sufferings (4:13) and are reviled in the name of Christ (4:14). They may implicitly be considered either murderers, thieves, criminals, or mischief-makers (4:15). They simply suffer as a Christian (4:16). Moreover, they face the attack of the devil, sharing in the suffering of many sisters and brothers in all the world (5:9).

Peter indicates that their suffering may indeed be in accordance with God’s will (4:19). But this does not imply that God intends or blesses what cruel masters do to their slaves (2:18–20), what unbelieving or inconsiderate husbands do to their wives (3:1–7), or the evil or abuse done in the Christian community or by pagans (3:9). In Peter’s perspective, God is aware of what is happening, and we ought to be aware of God’s presence (2:19–20).

Believers are to examine their lives to see whether they are simply suffering as a result of their own misdeeds (4:15). Thus they may try to avoid suffering that God cannot bless. Suffering which God can bless includes (1) the challenge of their faith (3:15), (2) the abuse they suffer for Christian behavior (3:16; 4:4), and (3) suffering because they bear the name of Christ (4:14). In this context, the Christian’s response to suffering harm or abuse becomes a significant part of Christian witness.

First Peter does not deal specifically with the question of suffering physical illness. By his wounds you have been healed (2:24c) is a statement to be understood metaphorically (Michaels:149–150), both in Isaiah as well as in 1 Peter. Peter is speaking of their conversion to Christ and the healing that brings, as shown in 2:25. He is not making explicit reference to the literal wounds inflicted on Jesus during his trials or the abuse that cruel masters have given slaves. The healing, “making whole,” is essentially the capacity to live in God’s strength and do God’s will in God’s way. This in no way excludes the healing, spiritually and also physically, that God brings to the believer and to the Christian community when God’s power to heal is acknowledged and sought for in prayer.

The larger perspective in 1 Peter is that the Christian responds to suffering in the light of Christ’s suffering, understood as both example and atonement, and in the light of coming judgment, as developed in the commentary notes (above).

Our understanding of Peter’s view of suffering includes the following: