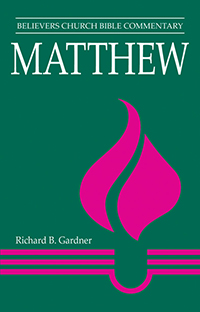 Anti-Semitism is the technical term for hostility toward Jews, whether ethnic, sociocultural, or religious in character. Already widespread in the ancient Greco-Roman world, anti-Semitism has been a recurring and often violent phenomenon throughout the Christian era. The most traumatic expression of anti-Semitism in modern times was the Holocaust, or the Shoah, in which millions of Jews perished as a result of the policies of Hitler’s Third Reich. In more subtle forms, anti-Semitism continues to affect the way many Christians feel and think about the Jewish community.

According to some critics, the NT itself fosters anti-Semitism by the way it portrays Jewish leaders and Jewish religion. Along with the Fourth Gospel, Matthew’s Gospel is frequently singled out as particularly troublesome. Harsh language abounds in references to Jewish leaders, including epithets such as hypocrites, vipers, blind guides (cf. Matt 15:6; 23:13-28). The same leaders are accused of perpetrating a bloody heritage of murdering God’s servants (Matt 23:29-36). As the plot of the Gospel develops, the picture of Israel becomes increasingly one of unbelief. The climax comes in the trial of Jesus when the crowds cry out “his blood be on us and our children” (Matt 27:25). The Contemporary English Version does somewhat better here: “We and our own families will take the blame for his death!” The consequence, according to some translations of Matthew, is that God abandons Israel’s holy place (Matt 23:38) and takes the kingdom away from Israel (Matt 21:43).

It is clear that material such as this has the potential to incite anti-Jewish feelings. But is Matthew in fact pursuing an anti-Semitic agenda? Several considerations prompt us to say no:

Having said all that, it remains true that an uncritical use of texts from Matthew can lead to a distorted view of Judaism and contribute unwittingly to anti-Semitism. How can preachers and teachers guard against that? Among other things, we can keep calling attention to the way conflict between the church and synagogue in Matthew’s day colored his picture of Judaism. In addition, we can lift up ancient and contemporary materials that show Jewish tradition as vital and constructive—to offset texts that portray Judaism in a negative light. Further, we can use Matthew’s critique of Jewish leaders and tradition as a generic critique that applies to all religious institutions, including our own, rather than as a means to vilify one particular people. Finally, we can engage in dialogue with Jewish brothers and sisters, a dialogue in which we may discover that God is indeed working through their history as well as through our own. (For further comment, cf. TBC and TLC on 21:18–22:14; TLC on 23:1-39; and TLC on 27:11-56]).