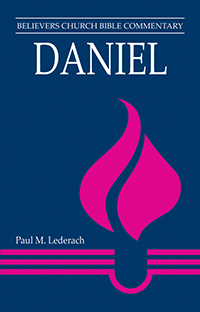 The Book of Daniel takes its name from its central figure. Daniel was a righteous man of unshakeable Hebrew faith, courageous in persecution, with ability to receive and interpret visions and dreams. Daniel and his companions were among the early deportees to Babylon taken by Nebuchadnezzar in 604 BCE or 597 BCE. Daniel was in Babylon until the third year of Cyrus (10:1). His service there spanned sixty to seventy years.

The Missionary Motif: The tract to the nations bears witness "to all peoples nations and languages" about the nature and work of Israel's God and his offer of grace to the world. This foreshadows Jesus' words, "All authority in heaven and on earth has been given to me. Go therefore and make disciples of all nations" (Matt 28:18-29).

The Way of Peace: Daniel offers an alternate way to resist evil. It sides with those who endure persecution rather than take up arms against the powers. It chooses to emphasize God's goal for history and trust him to act. The stories and visions depict ruthless rulers who oppress the people of God. Daniel and his companions are meek, peaceful, nonviolent, and self-giving even to death. There is disdain for worldly power, which is seen as short-lived. In many respects it opposes the Maccabean revolt. The Book of Daniel anticipates, supports, and illustrates Jesus' way of life and his ways of peace and nonviolence.

Date and authorship are not easily determined. The stories of Daniel and his companions suggest an early date 597–538 BCE. The visions suggest a late date, likely the second century BCE during the period of the Maccabees resistance 167–164 BCE. Though the visions are written in first person, "I saw in my vision" (7:2; 8:2; 9:20, 21; 10:17), apocalyptic literature of 200 BCE to 200 CE was often attributed to well-known personalities of the past. The stories and vision of the Book of Daniel do not require Daniel's authorship any more than the books of Ruth and Esther require Ruth and Esther to be the authors.

The Book of Daniel was the work of a compiler who assembled ancient stories with current apocalyptic visions. He was concerned about the Jewish homeland, the temple, and the dreadful events befalling the Jewish people at the hands of the violent Seleucid oppressor Antiochus IV Epiphanes (manifest [as a god]) 175–164 BCE. Also the compiler was not convinced that the violent response of the Maccabees was appropriate.

The structure of the book is simple. It contains six stories (Daniel 1–6) and four visions (7–12). For purpose of summary and content, it contains three sections:

The visions of the book lead scholars to designate Daniel as an apocalypse. The apocalyptic style grew out of prophecy. Reaching beyond Palestine, they developed visions for a worldwide cosmic mission of God and his people. Instead of a focus on Davidic messianism, they saw the whole world as God's domain. For them, the nations were God's enemies en masse. Instead of blunt speech, their message was couched in visions so puzzling to both writer and reader that angels were needed to explain the message.

Most baffling is the symbolism of apocalyptic writing. In it, common things of life have symbolic meaning, such as birds and animals. The lion suggests royalty; the ox, strength; the eagle, speed; the horns of an animal, power. Parts of the body have symbolic value: hand suggests power; legs, stability; white hair, age or majesty; mouth, oracle either divine or demonic; eyes, insight and knowledge. Clothing has meaning: a long robe means priesthood; a crown means status. Colors also have symbolic value: white means purity or victory; blood red signifies suffering or martyrdom, while scarlet suggests decadent luxury. Above all, numbers indicate more than numerical value: four points to the corners of God's created world; seven and forty suggest perfection and completion.

This tendency to see symbolism in animals and birds, for example, continues into the present. Hawks are advocates of military solutions to world problems. Doves suggest peaceful means. A chicken suggests cowardice. A pig is a glutton. The owl represents wisdom. A rabbit suggests excessive reproduction.

The OT has apocalyptic (or more accurately, proto-apocalyptic) passages in Isaiah (24–27), Joel, and Zechariah (9; 14). Ezekiel and Daniel lead in the development of this form. Apocalyptic visions flourished in the intertestamental period, in apocryphal (2 Esdras) and in pseudepigraphical writings (such as 1 Enoch and 2 Baruch). The NT offers apocalyptic passages in Mark 13, Matthew 24, and Luke 21; in 1 and 2 Thessalonians; and supremely in Revelation. In apocalyptic materials, secrets of heaven, earth, and the future are revealed from above in veiled, symbolic terms.

The first chapter brings together an immense amount of material providing background and theological insight necessary for understanding the stories and visions that follow. It tells how Daniel and his companions arrived in Babylon. It provides biographical information about Daniel and his friends. It introduces the theme that allegiance to God takes precedence over all other commitments. It emphasizes the sovereignty of God. The God of the Hebrews is more than a tribal deity. His activity involves international affairs as well as leading in the lives of individuals. He "gave" Jehoiakim into the hands of Nebuchadnezzar. He "gave" knowledge to Daniel and his companions. It contains the story of the young men's refusal to eat the king's rich food as their expression of commitment to their God while embracing many facets of a foreign culture. It also tells how the sacred vessels from the temple arrived in Babylon.

The first story (2:1-49) of Nebuchadnezzar's dream parallels Daniel's first vision (7:1-28). In Nebuchadnezzar's dream is a statue of four metals, and in Daniel's vision are four beasts rising from the sea. Both represent a sequence of four kingdoms which lead to the inbreak of divine action. A stone not quarried by human hands smashes the statue of iron and clay, bronze, silver, and gold. Then the God of Heaven sets up a kingdom that shall never be destroyed . . . and it shall stand forever (2:44). In Daniel's vision the fourth beat is a fourth kingdom with a king who oppresses God's people. By divine action "his dominion shall be taken away" and "the greatness of the kingdom and the whole heaven shall be given to the people of the holy ones of the most High; their kingdom shall be everlasting . . . and all dominions shall serve and obey them" (7:26, 27).

The second story of Shadrach, Meshach, and Abednego in the fiery furnace (3:1-30) and the fifth story of Daniel in the lion's den (6:1-28) deal with unwavering allegiance to God. Both involve royal edicts that Daniel and his companions refused to obey. The three men refused to fall down in worship of the statue that Nebuchadnezzar had set up. Daniel refused to limit his prayer only to the king for thirty days. In both cases refusal to add to or take away from faithfulness to God were vindicated. They were divinely rescued and then promoted.

The tract of the nations was compiled to strengthen and comfort persecuted Jews. It was also addressed to a worldwide audience by world-renowned leaders that experienced who God is and what the living God does. Nebuchadnezzar learned, "God is God of gods, Lord of kings, and a revealer of mysteries" (2:47). "I praise and extol and honor the King of Heaven, for all his works are truth, and his ways are justice; and he is able to bring low those who walk in pride" (4:37). Darius learned that God "is the living God . . . . His kingdom shall never be destroyed . . . . He delivers and rescues, he works signs and wonders in heaven and on earth" (6:26-27).

Without question, the vision of Chapter 7 is the climax of the book. It breaks into heaven itself. The Ancient of Days, God himself, is seated on a fiery throne, with multitudes serving him and standing before him. The Son of Man comes before him, "and to him was given dominion and glory and kingdom, that all peoples and nations and languages should serve him; his dominion is an everlasting dominion, that shall not pass away and his kingship is one that shall not be destroyed" (7:13-14) and "The kingdom and the dominion and the greatness of the kingdom under the whole heaven shall be given to the people of the holy ones of the Most High" (7:27).

This foreshadows the coming of Jesus who in his life and ministry, in all four gospels, referred to himself as the Son of Man. From the beginning to the end of his ministry he proclaimed the kingdom of God (Matt 4:17, 23; 16:28).

The last five chapters of the Book of Daniel contain three visions that further develop themes introduced by the first vision in Chapter 7.

In the second vision, Daniel is in Susa, the capital of Elam, at the river Ulai. He saw a ram charging westward. Then he saw a goat coming from the west at great speed. In a fierce battle the ram's two horns were broken. But then, the goat's great horn was also broken. Out of it came four horns. From one horn came a little horn that grew great. Gabriel appeared to interpret the vision. He said that the ram was the Persian Empire and goat was Greece. He traced the breaking up of Alexander the Great's Empire into four parts. Out of one part a king will emerge who will oppress the people's God. This oppressor will be broken. This vision is further commentary on the four metals of Nebuchadnezzar's dream and the four beasts of Vision 1.

Daniel was meditating on Jeremiah's prophecy that Israel's exile to Babylon would last for seventy years (9:2; Jer 25:11-12). This led to Daniel's prayer for his people, containing an overview of holy history contrasting Israel's unfaithfulness with God's faithfulness. In his prayer he uses God's personal name "Yahweh" (translated LORD, 9:2, 4, 8, 10, 13, 14). This name appears only here in the Book of Daniel. While Daniel prays for forgiveness for himself and his people, Gabriel appears. He came to give Daniel wisdom and understanding and to interpret the seventy years as seventy weeks of years or 490 years. This pointed to the time of Antiochus IV Epiphanes and the devastation of Jerusalem, its temple and the people.

After a lengthy introduction (Ch. 10) Daniel received word of a coming revelation. When a heavenly messenger appears, Daniel falls prostrate. The messenger explains that the message relates to the Jewish peoples. Daniel falls to the ground again. A second messenger touches his lips, strengthens him, and affirms the message. The call is to faithfulness. The vision is for the end of the days (10:14). The focus is on the people of God and their beautiful land (11:16, 41). The message extends from 11:2 to 12:4.

The history behind the vision is as follows: The Jews were subject to Egypt 322–198 BCE under the Ptolemies, the king of the south, and then subject to Syria, 198–164 BCE, the Seleucids, the king of the north. Both Egypt and Syria attempted to eliminate Jewish practices and tried to impose Greek ideas and culture on Jewish communities.

Antiochus IV Epiphanes, king of the north, invaded Egypt, king of the south. On his return, he marched on Jerusalem. Thinking the Jews were pro-Egypt, he pillaged the temple and put thousands to death, 169 BCE. A year later, Antiochus attempted a second invasion of Egypt, which the Romans forced him to abandon. On his return, Antiochus again moved on Jerusalem with 22,000 men. Jewish worship was forbidden. Pagan rites were introduced. Antiochus had an altar to Zeus erected in the temple. This was the "abomination that desolates" (9:27; 11:31; 12:1).

The vision concludes with Daniel conversing with the messenger. He asks when these events will occur and is given cryptic answers:

The Book of Daniel ends with a beatitude, "Blessed is he who waits" (12:12), recalling Isaiah 30:18. Daniel is told to "Go your way till the end and you shall rest and shall stand in your allotted place at the end of the days. The book ends in great tranquility.