Difference between revisions of "Ecclesiastes" 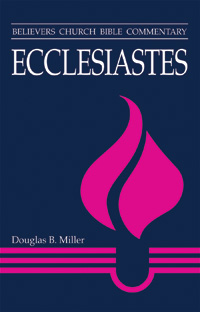 In varying degrees, all people face the issues that are addressed by Ecclesiastes: lack of satisfaction or sense of purpose, financial catastrophe, personal tragedy, societal injustice, fear, frustration, chance, uncertainty, physical suffering, old age, and death. In important ways the book faces the “dark side” of faith, the issues that are often troublesome for those who seek to affirm the goodness, power, and love of God. Indeed, the author—in Hebrew Qohelet (pronounced ko-HELL-it), often translated as the Teacher or the Preacher—has much to say about the nature and activity of the Deity; the name "God" (’elohim) is one of the most frequent terms in the book, occurring forty times. He essentially affirms the orthodox biblical portrait of God, yet he does not hesitate in ascribing to God some of the pain and inscrutabilities of life.

The book is traditionally attributed to Solomon, as is implied by descriptions of the author (1:1, 12), though the assumed role fades after the second chapter. The language and internal evidence of the book have led scholars to choose a date in either the 5th or the 3rd centuries BCE with Palestine as locale. The author is a Hebrew sage, possibly of the middle classes who are also his audience. A third-person voice commends the author, perhaps the latter’s pupil (1:1; 7:27; 12:9-14). The title of the book, "Qohelet," also the author’s moniker, comes from a word meaning “to gather” (grammatically feminine, possibly indicating a profession), and may reflect gathering people (hence “the Preacher”) or wisdom.

In the Hebrew canon, Ecclesiastes is located in the third division known as the Writings. It is one of the subgroup of five books known as the Megilloth (the other four are Song of Songs, Ruth, Lamentations, and Esther). It is read at the Feast of Booths. In the Christian Old Testament, the book is located between Proverbs and Song of Songs.

The book displays proverbs and other sayings, and fits well within the type of wisdom writings sometimes designated “existential” for their challenge or complaint concerning the hopeful philosophies of traditional wisdom. Perceived contradictions in the book and possible inconsistencies with the Torah contributed to doubts about its coherence and its status as Scripture. When seen as paradoxes among the complexities of life, the book’s tensions are consistent with the author’s rhetorical goals: establish credibility, critique poor solutions, then provide counsel. Five major approaches have been taken to the book, viewing the author respectively as repentant, ascetic, bitterly cynical, hopeful of joy in the midst of absurdity, and realistic about life. All but the cynic approach discern pedagogical motives in the book, including genuine advice for making the most of life. The negativity of the book is interspersed with more optimistic sections leading some to conclude that the book was edited by a corrective writer. Others conclude that Qohelet writes to offer hope to the extremely discouraged without denying life’s harsh realities. His God is quite active, though distant, and is a giver of good gifts, though inscrutable. Qohelet has confidence in God’s judgment, yet he refuses to deny the reality of injustice and inexplicable tragedy.

Qohelet states and begins to defend his thesis that “all is vapor” (hebel, traditionally vanity). He starts with a question (1:3 What profit for toil?) and continues with a poem about the futile cycles of the natural world, revealing from the beginning that ambiguity is part of his style: words that could praise the Creator for a marvelous work of consistency may also express frustration. Qohelet explores the satisfaction achieved by pleasure, wisdom, and work. He considers them all vapor, in this case, a futile effort. Surprisingly he advises to enjoy life as a gift from God, hinting that he may answer the questions that at first seem rhetorical: reward for work is possible (2:24; 4:9).

Qohelet’s time poem (3:1-8) is sometimes cited as justifying divinely sanctioned warfare: “(there is) a time for war” (3:8). However, this requires assuming that Qohelet uses the poem as a list of divinely sanctioned activities, something not demonstrable either from the poem itself or from elsewhere in the book. Qohelet mentions war on two other occasions without assessment (8:8; 9:11). Yet he critiques the qualities and actions that lead to war (4:4-8) and addresses oppression directly (3:16-17 and chaps. 4, 8).

Though sometimes assumed to be connected only through catch-words, the paragraphs of chap. 4 reflect a careful treatment of the interconnection between oppression and the individualistic pursuit of material goods (4:4-8). Qohelet advises simplicity in community (4:6, 9-12), and challenges naive confidence in political structures (4:13-16).

In 5:1-7, Qohelet urges that words be few in reverence for God. Vows should be kept lest the Deity in anger destroy one’s work. In the remainder of the book’s first half, Qohelet emphasizes the lack of satisfaction achieved by wealth that can be easily lost. He encourages finding good in one’s work, echoing themes he raised in chap. 4. He concludes the first half by summarizing that human effort to achieve satisfaction in work, wisdom, and pleasure accomplishes little.

The book’s second half emphasizes the limitations of human knowledge, asking, Who knows what is good? Qohelet challenges religious triumphalism, advising to live within the realities of one’s weaknesses without making them worse by embracing wickedness or folly (7:13-22).

Before the powerful (8:1-17), the Teacher urges prudence and expresses confidence in God’s ultimate justice. The wise cannot know all, but God’s good gifts should be enjoyed. One of the perplexities of life is that righteous and wicked share the same fate (9:1-10). One should enjoy life now because death comes all too soon.

Time and chance happen to everyone (9:11–10:15); no one can predict how their life will turn out. Qohelet learned that wisdom is valuable but also vulnerable. While some problems can be attributed to a lack of wisdom, accidents happen even when wisdom is employed. In 10:16–11:6, Qohelet advises caution toward those in power and diligence with contentment (cf. 4:9-12). He commends generosity while one takes advantage of opportunities to work.

Finally (11:7–12:8), the Teacher praises the time of youth and urges his audience to enjoy it while they can. His perspective on the older years of life is not hopeful. His final poem seems to address both the end of a given person’s life as well as the end of the present age.

The Message of the Book

Here is a summary of the book's message, retold mostly in first person, similar to Qohelet's voice in Ecclesiastes.

Ecclesiastes, 1–2. Qohelet begins by setting forth his thesis and the theme question for the book's first half:

All is vapor! What gain is there from toil? The world is weary; cycle after cycle nothing changes for the better.

In the guise of Solomon, the author reports on a royal experiment:

Ecclesiastes, 3–4. A poem about time demonstrates that human activity is similar to the cycles of the natural world:

God is in charge, and thus there is little to gain from one's own efforts. I saw that God made human beings curious about life's mysteries. Yet God keeps the truth hidden so that people will revere God. In the midst of injustice, God tests humans to help them realize they are frail, with the same fate as animals. They cannot know whether they will live on after death, so I realized it is best to enjoy what God has given for now. I discovered that some who are oppressed would be better off dead. Those who could help such people are working to keep up with their neighbors in material things. Some have even become workaholics, working for no benefit to others and making their own lives miserable. Instead, one should live a simple life of mutual support with others. There is no reason to put confidence in a wise and just leader if the citizenry is not willing to adopt a just lifestyle.

When worshiping, you should revere God and be careful of your words. Unlike fools, keep your vows to God. In anger, God could destroy the work of your hands. I have seen injustice in the world, but also I have seen that the wealthy and powerful have their own set of problems. Wealth is easily and unexpectedly lost. It is best to focus on the present to appreciate the good things God has given. In summary to this point: it is futile to seek satisfaction in toil, wisdom, and pleasure.

Ecclesiastes, 6:10–8:17. Qohelet presents the theme question of the book's second half: Who knows what is good?

Human life passes quickly. Wisdom is helpful, but it cannot guarantee good results. God's actions cannot be thwarted, and human knowledge is limited because mortals do not know their destiny. Avoid wickedness and foolishness, but also recognize that you cannot manipulate the Deity by zealous religious practices and the pursuit of wisdom. No one avoids sin completely, so keep in perspective what you see and hear about others. I learned that it is difficult to achieve wisdom and avoid folly. Be careful before the powerful; some things are out of human control, but in others good choices bring an advantage. I saw the success of the wicked and problems of the righteous, examples of how life can be disgusting; yet I know that God's justice will eventually prevail. In the meantime, enjoy the good things God has given. I found that even the wise cannot understand God's ways.

Again I observed that one of the problems with life is that both righteous and wicked die in the end. The only advantage of the living is that they know they will die. You should make the most of enjoying life while you can. Time and chance happen to everyone; no one can predict how their life will turn out. I learned that wisdom is valuable but also very vulnerable. And while some problems can be attributed to a lack of wisdom, accidents happen even when wisdom is employed. You should carefully assess what is happening, but speak discreetly concerning those in power. Though much is outside human knowledge and control, good things will come if you work diligently and give generously to others.

Enjoy life while you are young, yet remember that God holds you accountable for what you do. Old age is a time when the ability to enjoy life is reduced. The end is coming. "All is vapor!"

Based on extant writings, Ecclesiastes was apparently not as important for Anabaptists of the sixteenth century as other portions of Scripture; their engagements with it happened in piecemeal fashion with concern for matters such as the worthlessness of the present age, the obstinacy of the wicked, the Church as a visible body, the danger of religious triumphalism, and the importance of fearing God. But the book has even more to offer. In its distinctive manner, Ecclesiastes addresses such important issues as pleasure and work, wisdom and faith, power and oppression, simplicity and community, faith and cynicism, human weakness and potential, and the character of God in a mysterious universe.