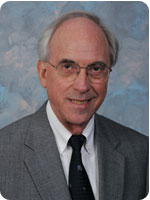 George R. Brunk III is dean emeritus and professor emeritus of New Testament at Eastern Mennonite Seminary (EMS) in Harrisonburg, Virginia. He served as dean of EMS for twenty-two years and as interim president of Anabaptist Mennonite Biblical Seminary in 2009. Brunk has also served as moderator of the Mennonite Church general assembly and a member of the general board of the Mennonite Church. He worked as missionary pastor and field administrator with Virginia Mennonite Board of Missions in Palermo, Sicily, for six years.

Brunk, who was born in Newport News, Virginia, is a graduate of Eastern Mennonite University, Eastern Mennonite Seminary, and Union Theological Seminary of Virginia. His articles have appeared in numerous publications.

A resident of Harrisonburg, Virginia, Brunk is a member of Lindale Mennonite Church, where he has served as chair of the board of elders. He was married to Erma Hess for forty-one years and has two children. After Erma's death, Brunk married Ruthann Miller, and together they have eleven grandchildren.