Mennonite Church USA (MCUSA) is the largest Mennonite Conference in the United States. MCUSA is officially associated with Mennonite World Conference. In 2006 MCUSA had 950 congregations and 110,696 members.[1].

Persecution and the search for employment forced Mennonites out of the Netherlands eastward to Germany in the 17th century. As Quaker evangelists moved into Germany, they received a sympathetic audience among the larger of these Dutch-Mennonite congregations around Krefeld, Altona-Hamburg, Gronau and Emden.[2] It was among this group of Quakers and Mennonites, living under ongoing discrimination, that William Penn solicited settlers for his new colony. The first permanent settlement of Mennonites in the American Colonies consisted of one Mennonite family and twelve Mennonite-Quaker[3] families of Dutch extraction who arrived from Krefeld, Germany, in 1683 and settled in Germantown, Pennsylvania. Among these early settlers was William Rittenhouse, a lay minister and owner of the first American paper mill. Jacob Gottschalk was the first bishop of this Germantown congregation. This early group of Mennonites and Mennonite-Quakers wrote the first formal protest against slavery in the United States. The treatise was addressed to slave-holding Quakers in an effort to persuade them to change their ways.[4]

In the eighteenth century, 100,000 Germans from the Rhenish Palatinate, collectively known as the Pennsylvania Dutch, emigrated to Pennsylvania. Of these, around 2,500 were Mennonites and 500 Amish.[5] This group settled farther west than the first group, choosing less expensive land in the Lancaster, Pennsylvania, area. A member of this second group, Christopher Dock, authored Pedagogy, the first American monograph on education. Today, Mennonites also reside in Kishacoquillas Valley (also known as Big Valley), a valley in Huntingdon County, Pennsylvania and Mifflin County, PA counties, also in Pennsylvania.

During the Colonial period, Mennonites were distinguished from other Pennsylvania Germans in three ways:[6] their opposition to the American Revolutionary War, resistance to public education, and disapproval of religious revivalism. Contributions of Mennonites during this period include the idea of separation of church and state and opposition to slavery.

From 1812 to 1860, another wave of immigrants settled farther west in Ohio, Indiana, Illinois and Missouri. These Swiss-German speaking Mennonites, along with Amish, came from Switzerland and the Alsace-Lorraine area.

During World War II, Mennonite conscientious objectors were given the options of noncombatant military service, serving in the medical or dental corps under military control or working in parks and on roads under civilian supervision. Over 95% chose the latter and were placed in Alternative Service camps.[8] Initially the men worked on road building, forestry and firefighting projects. After May 1943, as a labour shortage developed within the nation, men were shifted into agriculture, education and industry. The 10,700 Canadian objectors were mostly Mennonites (63%) and Doukhobors (20%).[9] 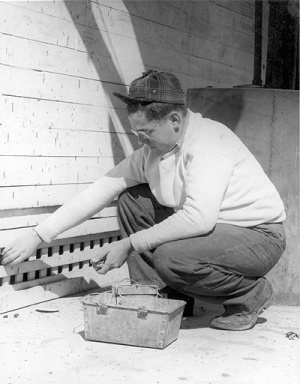 In the United States, Civilian Public Service (CPS) provided an alternative to military service during World War II. From 1941 to 1947, 4,665 Mennonites, Amish and Brethren in Christ[10] were among nearly 12,000 conscientious objectors who performed work of national importance in 152 CPS camps throughout the United States and Puerto Rico. The draftees worked in areas such as soil conservation, forestry, fire fighting, agriculture, social services and mental health.

The CPS men served without wages and minimal support from the federal government. The cost of maintaining the CPS camps and providing for the needs of the men was the responsibility of their congregations and families. Mennonite Central Committee coordinated the operation of the Mennonite camps. CPS men served longer than regular draftees, not being released until well past the end of the war. Initially skeptical of the program, government agencies learned to appreciate the men's service and requested more workers from the program. CPS made significant contributions to forest fire prevention, erosion and flood control, medical science and reform of the mental health system.

After immigration to America, many of the early Mennonites split from the main body of North American Mennonites and formed their own separate and distinct churches, a process that began in 1785 with the formation of the orthodox Reformed Mennonite Church and is ongoing today. Many of these churches were formed as a response to deep disagreements about theology, doctrine, and church discipline as evolution both inside and outside the Mennonite faith occurred. Many of the 'modern' churches descended from those groups that abandoned traditional Mennonite practices. Today, the groups that have held to the traditional interpretations of Mennonite doctrine are increasing at a more rapid rate than those groups that have rejected these standards. However, the moderate denominations are still by far the largest and continue to grow at a steady rate.

Dutch and German immigrants from Krefeld|Krefeld, Germany settled in Germantown, Pennsylvania in 1683. Swiss Mennonites came to North America in the early part of the 18th century. Their first settlements were in Pennsylvania, then in Virginia and Ohio. These Swiss immigrants, combined with Dutch and German Mennonites and progressive Amish Mennonites who later united with them, until 2002 made up the largest body of Mennonites in North America (in the past often referred to as the "Old Mennonites"). They formed regional conferences in the 1700s, and a North American conference in 1898. The year 1725 is often considered the date of organization in the United States, when a ministers' conference met in Pennsylvania and adopted the Dordrecht Confession of Faith as their official statement of faith.

In 1983 the General Assembly of the Mennonite Church met jointly with the General Conference Mennonite Church in Bethlehem, Pennsylvania, in celebration of 300 years of Mennonite witness in the Americas. Beginning in 1989, a series of consultations, discussions, proposals, and sessions (and a vote in 1995 in favor of merger) led to the unification of these two major North American Mennonite bodies into one denomination organized on two fronts - the Mennonite Church USA and the Mennonite Church Canada. The merger was "finalized" at a joint session in St. Louis, Missouri in 1999, and the Canadian branch moved quickly ahead. The United States branch did not complete their organization until the meeting in Nashville, Tennessee in 2001, which became effective February 1, 2002.

The merger of 1999-2002 at least partially fulfilled the desire of the founders of the General Conference Mennonite Church to create an organization under which all Mennonites could unite. Yet not all Mennonites favored the merger. The Alliance of Mennonite Evangelical Congregations represents one expression of the disappointment with the merger and the events that led up to it.

The doctrinal faith of the Mennonite Church USA is set forth in Confession of Faith in a Mennonite Perspective.[12] This confession was adopted in 1995 at the joint session in Wichita, Kansas. It contains 24 articles on the following: "God; Jesus Christ; Holy Spirit; Scripture; Creation and Divine Providence; the Creation and Calling of Human Beings; Sin; Salvation; The Church of Jesus Christ; The Church in Mission; Baptism; The Lord's Supper; Feet washing; Discipline in the Church; Ministry and Leadership; Church Order and Unity; Discipleship and the Christian Life; Christian Spirituality; Family, Singleness, and Marriage; Truth and the Avoidance of Oaths; Christian Stewardship; Peace, Justice, and Nonresistance; The Church's Relation to Government and Society; and The Reign of God."

Key Individuals in the Life of the Church

Several Mennonite groups have their own private or parochial schools. Conservative groups, like the Holdeman, have not only their own schools, but their own curriculum and teaching staff (usually, but not exclusively, young unmarried women).

According to MCUSA website, these are the current Area Conferences[13]:

Retrieved from "https://anabaptistwiki.org/mediawiki/index.php?title=Mennonite_Church_USA&oldid=19696"
Category:
This page was last edited on 22 December 2021, at 16:54.
Privacy policy
About Anabaptistwiki
Disclaimers