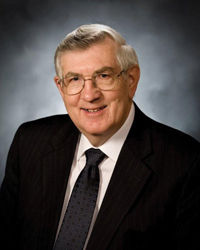 Paul M. Zehr was born in Croghan, New York, where he grew up on a farm and attended local public schools. He graduated from Eastern Mennonite College in 1962 and from Eastern Mennonite Seminary in 1965. Paul served as pastor at First Mennonite Church of St. Petersburg, Florida, from 1965 to 1973. Following this eight-year experience of pastoring an urban church, he attended Princeton Theological Seminary, where he earned a Th.M. in biblical studies in 1975.

Paul then served as pastor at a small church and began teaching biblical and theological courses in the Lancaster, Pennsylvania, area. His teaching ministry reached several in-service pastors, which led to his appointment as director of external programs for Easter Mennonite Seminary. It also created within him a greater awareness of the person, role, and function of the pastor.

In 1980, Paul was ordained bishop and supervised pastors in five congregations, a position he held for twenty-five years. In 1987, he graduated from Eastern Baptist Theological Seminary with a D.Min. A major part of this doctoral study was the preparation of a philosophy of Mennonite pastoral education and a curriculum guide for Mennonite conference-based pastoral education. For more than twenty years Paul worked in supervised pastoral education. His interest in biblical studies continued in teaching classes and in chairing the editorial council for the Believers Church Bible Commentary series.

Paul and his wife, Mary, are active members of Witmer Heights Mennonite Church. Now in their retirement years, Paul and Mary have more time to relax, travel, and give themselves to the comings and goings of their four adult children (Karen, Marcia, Timothy, Daniel), their spouses, and six grandchildren.