Profile of the Assembly in Philippi (in Philippians) 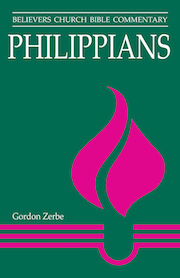 Various attempts have been made to develop a profile of the Philippian assembly in regard to its size, ethnic-political identity, and socioeconomic rank. Reconstructions of the profile have been significant for interpretations of (1) the distress experienced by the assembly, (2) the internal difficulty evident within the community, and (3) Paul’s rhetoric in promoting a particular messianic identity and loyalty.

The traditional view is that the community is composed primarily or entirely of Roman citizens. Many are descendants of original veteran colonists and proud of their Roman identity and status. Some are wealthier, even if none are from the elite class of decurions (the order from which the magistrates come). The scenario posits that Paul invites them to develop a proper understanding of their dual Roman-Christian citizenship, balancing their religious and their political identities and responsibilities insofar as they pertain to different spheres of life. As Christians, they can remain patriotic Romans as long as their Roman loyalty does not cause them to transgress the way of life appropriate for Christians.

One alternative to this view accepts this basic profile of the community but argues that Paul’s exhortation boldly calls the members, both free citizens and public slaves, to relinquish their proud identity and loyalty as Romans. For those few without the cherished Roman citizenship, Paul’s call is to desist from their quest to gain Roman citizenship as the supreme guarantee of security and happiness (Cassidy 2001b: 163, 189, 191, 194–95; de Vos).

A leading second alternative, and the view taken in this commentary, argues for the following profile:

1. Ethnopolitical Identities. The assembly probably includes a range of ethnic backgrounds, political identities, and social-legal ranks. It appears that a sizable core group are Judean (Jewish) citizens by birth, proselytes, or Judean adherents or sympathizers (“God-fearers,” e.g., Lydia, Acts 16:14; Crossan and Reed; Fee: 17–18). Evidence in favor of this includes the following: the beginnings of the community in a Jewish place of prayer, the lack of evidence of conflict with the Jewish community (see EN on Phil 3:2–3 and 3:4–11), the presence of scriptural allusions in the letter, Paul’s positive appropriation of Jewish identity markers (Phil 3:3a, We are the circumcision), and Paul’s decision to celebrate the Feast of Unleavened Bread in Philippi (Acts 20:16).

Linguistically, most are probably at home in Greek culture, and some might hold citizenship in a Greek city, such as migrants from Asia (e.g., Lydia). Others might be Greek-speaking migrants who lack formal citizenship in a Greek city (the majority, according to Portefaix: 117), members of other ethnic groups (perhaps some indigenous Thracians). Those who hold Roman citizenship are perhaps a strong minority, perhaps 25–40 percent (Oakes 2001), but probably not the majority. Among those residing in urban Philippi, Roman citizens were likely no more than 50 percent, so the percentage of Roman citizens in the messianic congregation can hardly have been higher than this.

Issues of ethno-political identity likely contributed to internal tensions in the community. In Philippians, those without Roman citizenship are called to desist from questing for citizenship status and the privileges that go with it. Meanwhile, those who enjoy Roman citizenship are invited to dissociate themselves from any pride of rank or zealous loyalty as Romans and are instead invited to place their hopes, security, and identity solely in relation to Lord Messiah Jesus (Oakes 2001, 2002, 2005). Those with a primarily Israelite identity are invited to celebrate that status, but also to reframe it in light of Messiah (3:4–14).

3. Socioeconomic Status. Based on general evidence about Paul and his communities, the most likely candidates for membership would be those from lower or middling ranks, although those with high “status inconsistency” must also have been present (e.g., women from elite/wealthy families; Acts 17:4, 12). Most members probably came from a social status similar to Paul himself: primarily subsistence-level artisans and small merchants, with a few of more comfortable status, but far from the wealth of the elite Roman classes (Meggitt). If the core of the group consisted of artisans or small-time merchants, the community may have met in small houses, insulae (apartment buildings), or workshops (de Vos: 250–61). Alternatively, meetings could be held in the larger homes of wealthier individuals (for instance, Lydia, who was head of a household and host to Paul and Silas; Acts 16:15), who might also have enjoyed Roman citizenship. It also appears that there is considerable variation in status and rank, contributing to internal disunity and rivalry (Oakes 2011). Though not as wealthy overall compared to the Corinthians (2 Cor 8:2; 11:9), the community had resources sufficient to support Paul in prison (Epaphroditus; financial aid). The use of commercial imagery in Philippians (3:4–9; 4:10–20) assumes a level of familiarity with small-business practices.

4. Gender Dynamics. Evidence suggests that a good portion of those in leadership were women (Lydia, Acts 16; Euodia, Syntyche, Phil 4:2–3), continuing the original core group of mainly women (Acts 16:13–16, 40). Some of these may have come from families with relatively high status compared to some other members. This may reflect the general sociocultural context of Roman Macedonia, where women appear to have been in more significant positions of civic leadership compared to some other locations.