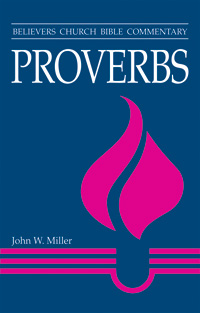 Proverbs can serve as a window into the spirituality of the whole Bible. In the saying: “The fear of the LORD is the beginning of knowledge” (1:7 ), a connection is forged between faith in God and the pursuit of empirical "knowledge" and "wisdom" (cf. 15:33), between our faith and prudential values. In Proverbs the primary attribute of God is wisdom. "By wisdom" he created the universe (3:19-20); "wisdom" was with him from the dawn of time (8:1, 22). This theology permeates the whole Bible. It is the theology that finds expression on the very first pages of the Bible, in Genesis 1. It is this vision that manifests itself in Psalm 104, where the psalmist exclaims: “How many are your works, O LORD! In wisdom you made them all” (104:24). It is also the theology of Jesus' teaching in the Sermon on the Mount, where he speaks of God's watchful care over all aspects of his creation and encourages his disciples to be "wise" and to build their lives on the "rock" of his teachings.

Individual units of the book of Proverbs are not “proverbs” in the usual sense. We usually think of a “proverb” as a short, pithy saying. This not what we encounter in Proverbs, but poem-like compositions (either short or long) that state a truth or teach a lesson in a picturesque, compelling manner. The book has three well-marked sections: an introductory section consisting of mostly longer poems (Prov. 1–9); a main section consisting of 375 almost exclusively two-line poems (10:1–22:16); and a supplementary section consisting of wisdom poems from a variety of sources (22:17–30:33).

A heading in the supplementary section informs us that (literally translated) “also these are the proverbs of Solomon which the men of Hezekiah king of Judah copied out” (25:1). The word "also" in this heading suggests “the men of Hezekiah” did more than this. They "also" copied out the 375 “proverbs of Solomon” in the main section, and possibly enlarged the entire book. So in reality the book of Proverbs is a new, greatly enlarged Hezekiah Edition of Proverbs (Miller: 17-26). In some ways this new edition is similar to instruction manuals of Egypt—in fact, the "first" thirty proverbs in the supplementary section is an adapted version of an Egyptian manual (Ruffle: 293-331). But this new edition is larger by far than any comparable type of wisdom manual of any nation at the time. In this sense, this new edition of Proverbs is unique—there is nothing like it for size and diversity.

When was this greatly enlarged Hezekiah Edition produced? On the basis of the heading in Proverbs 25:1, the rabbis of the Babylonian Talmud attributed the present book of Proverbs not to Solomon, but to “Hezekiah and his colleagues” (B. Bat. 15a). Hezekiah reigned in Judah for “twenty-nine years” (2 Kings 18:2). During his reign he carried out unprecedented reforms based on the teachings of Moses (2 Kings 18:3-6; 2 Chron 29-31). In the “fourteenth year” of his reign (or 701 BCE) an epochal event occurred (2 Kings 18:13). The Assyrian king Sennacherib, aspiring to conquer the world, invaded and devastated Judah. His army was then itself decimated by an “angel of the LORD” (pestilence). He had to withdraw to Nineveh, the capital city of the Assyrian Empire (2 Kings 19:35-36), without destroying Jerusalem or deposing Hezekiah.

There followed for the kingdom of Judah a surprisingly hope-filled interlude. During this time it became one nation again, somewhat as it was in the days of David and Solomon, and gained the esteem of the surrounding nations (cf. 2 Chron 32:22-23). It was in this hope-filled interlude that some in Judah caught a vision of a better world without war (cf. Isa 2:1-5). This interlude is also when the enlarged Hezekiah Edition of Proverbs might have been compiled. 2 Chronicles 29–31 clarifies that the “men of Hezekiah” (Prov 25:1) who did this were not professional scribes (as usually thought), but priest-like Levites, who traced their role in Israel right back to the time of Moses (Deut 10:8-9).

For Learning about Wisdom

The size and diversity of this greatly enlarged new Hezekiah Edition may be related to its purpose. Like the much smaller instruction booklets of Egypt, it begins with the name of a king or high official who sponsored the book (1:1). Its statement of purpose is also similar: “For learning about wisdom and instruction, for understanding words of insight . . .” (1:2). The synonyms used in the book itself for "wisdom" are "knowledge" and "understanding." Knowledge refers to factual data derived from bodily senses; "understanding" has to do with the way this empirical knowledge is assessed and applied (Goldberg: 103; Gilchrist: 366-67). Yet another kind of wisdom is the kind young people need as they approach adulthood. Aristotle in book 6 of his Ethics defines wisdom of this kind as “prudence”: knowing “what is conducive to the good life generally” (Aristotle: 209). A similar thing is said in the preface of Proverbs: namely, that its teachings are for conveying “shrewdness to the simple, knowledge and prudence to the young” (1:4). The book's teachings are often addressed to a “son” or “sons” (1:8; 4:1). These are not small children but young men on the verge of adulthood, like the "young man" so vividly described in Proverbs 7:6-23. This focus on educating “sons” (not only “sons” of Israel) gives the impression that this greatly enlarged Hezekiah Edition was created as a manual of instruction for youth worldwide. In the majestic poem in Proverbs 8, "wisdom" is personified as a woman "rejoicing" everywhere in God's created world, “delighting in humankind” (Prov. 8:31). All nations have wisdom—all nations need it!

However, there is a subtle philosophical difference between the wisdom of the Hezekiah Edition of Proverbs and the wisdom of the other nations (and perhaps the older Solomon Edition of Proverbs). This difference is complex but important. It is summed up in the motto at the very front of this edition: “The fear of the LORD is the beginning of knowledge, but fools despise wisdom and discipline” (1:7). Coming right after the preface, this motto appears to be the defining “watchword” of this edition. This watchword's first line is repeated a second time at the end of the introductory section in Proverbs 9:10a, as follows: “The fear of the LORD is the beginning of wisdom.” This gives the impression that it frames these opening poems. Only this time it has a different "second" line: “. . . and knowledge of the Holy One is understanding” (9:10). The word translated Holy One in this second line is a “plural of majesty” (in Hebrew), meaning “the most Holy One.” This form of this word is found only in two other places in the Hebrew Bible: in Hosea 12:1 (Heb. 11:12), and in the "oracle" of Agur son Jakeh in Proverbs 30:1-4, the only prophetic "oracle" in Proverbs.

The significance of this second line in Proverbs 9:10b is clarified when Agur writes in a crucial line of his "oracle" (literally translated): “I have not learned wisdom, but knowledge of the [most] Holy One I know” (30:3b). A great injustice is done to Agur when this line is mistranslated (as it invariably is): “nor have I knowledge of the Holy One” (NIV 1984). This is just the exact opposite of what Agur says. There is no word meaning “nor” or “not” in the Hebrew of this line, as there is in the oracle's previous two lines. It is linked to the previous line by a single Hebrew letter (wāw) that can be translated either as “and” or “but.” In this instance this letter (wāw) should be translated “but” (not “and”), because Agur is drawing a strong contrast between what he does not know (as stated in 30:2-3a) and what he does know (as stated in 30:3b). Agur is not a scholar of wisdom as are Ithiel and Ucal to whom his "oracle" is addressed (30:1b). Therefore, he admits to being “the most ignorant of men” and not having “learned wisdom” (studied it as a scholar)—but one thing he does know: “knowledge of the [most] Holy One I know” (30:3). Agur is a fervent believer in the God of Israel. Not only does Agur's "oracle" express deep devotion to Yahweh (“the most Holy One”), but his prayer does too (30:7-8), and in other parts of his oracle he asserts his loyalty “to every word of God” (30:5-6), the latter referring to “words of Yahweh” received by Moses written on two stone tablets (Deut 5:22).

The watchword of the Hezekiah Edition of Proverbs is similar to a watchword that might have stood at the beginning of the older Solomon Edition of this book. This other watchword is in a poem which Solomon composed. It relates what Solomon was taught when he was “a boy in my father's house” (4:3). Among the things his father taught him was (literally translated): “The beginning of wisdom: get wisdom and with all your getting, get understanding” (4:7). Those who created this Hezekiah Edition agreed with this watchword, otherwise they would not have retained it, but they also wanted to proclaim to the world that “the fear of the LORD [Yahweh the unseen creator God of Israel] is the beginning of wisdom” (1:7; 9:10). Therefore, an attempt was made throughout the Hezekiah Edition of Proverbs to insert the wise Yahweh-centered teachings of Moses into the empirical poems of Solomon. The Hezekiah Edition of Proverbs may have ended with Agur's “oracle” (30:1-6), prayer (30:7-9), and poems (30:10-33). “That his name and words are located at the end of the Hezekiah Edition accords with the custom of the time of sometimes identifying the person responsible for a scroll's contents in its closing sentences (cf. Eccl 12:9-10; Ps 72:20; Deut 34:10-12)” (Miller: 279).

Some nations have more wisdom than others—this is what is said about the laws of Moses: “You must observe them diligently, for this will show your wisdom and discernment to the peoples, who, when they hear all these statutes, will say, 'Surely this great nation is a wise and discerning people!'” (Deut 4:6). That is also what is said about the wise teachings of Solomon: “God gave Solomon very great . . . discernment, and breadth of understanding . . . so that Solomon's wisdom surpassed the wisdom of all the people of the east, and all the wisdom of Egypt . . . People came from all the nations, to hear the wisdom of Solomon” (1 Kings 4:30-34). We can take these references to the superiority of Moses' and Solomon's wisdom as clues to why the greatly expanded Hezekiah Edition of Proverbs was created. Those who created this enlarged scroll were attempting to fashion a book that could be shared with the world. “The passion that inspires this collection is not just that Judah or Israel be a great nation, but that the nations of the world might come to know the God of Israel and his teachings. The compilers hoped that eventually the whole world might come to live in accord with these values and thereby find a way out of the misery and wars that now ravage it (cf. Isa 2:1-5)” (Miller: 237).