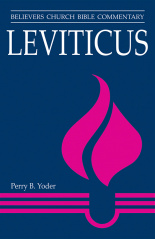 The word scapegoat was invented by William Tyndale for use in his English translation of 1530. He used it to refer to the unnamed goat in Leviticus 16:8 that is sent away into a deserted place. Tyndale needed to coin a new word because this living goat has no name in the Hebrew text.

The ritual indicated involves two goats. One is sacrificed. The other, the scapegoat, is the living goat that is sent away. In Hebrew it is called the goat for Azazel (Lev 16:8 so transcribed in NET). The fate of this goat is contrasted to God's goat, which is to be sacrificed. The scapegoat is described as the live goat, since it is spared from being sacrificed (Lev 16:20). Aaron places both hands on the head of this living goat and confesses over it the sins of the people. These sins are transferred to the goat's head. The goat, now bearing all of Israel's transgressions, is led out of the camp and sent away to a deserted place.

Should we call this goat "the one for Azazel," "the living goat," "the sin-bearing goat" or "the goat sent away"? Tyndale solved this problem by giving the goat a name: scapegoat. In time, the word no longer referred to the "sent-away, sin-bearing goat" in Leviticus 16 but became free floating and unattached to its original meaning. Today the word scapegoat has a different meaning. Now a scapegoat is someone blamed for the mistakes of others and who bears the punishment they should bear. Today a scapegoat is a victim who suffers in place of the real culprits.

This new meaning of the term is now read back into Leviticus 16, and it is assumed that the scapegoat mentioned there plays the same role as someone we now call a scapegoat. But this is an anachronistic reading. The scapegoat in Leviticus is not blamed for the sins of the people but acts to remove the people's sins from the sanctuary and camp. The scapegoat is not punished for the sins of the people but is an elimination vehicle. In fact, at the end of the day, the scapegoat is living, and the other goat has been slaughtered, drained of blood, and burned. If any goat suffered for the sake of the community, it would be this goat, not the one left alive.

If we follow the course of events in Leviticus 16, we find that the scapegoat is chosen by lot. There are two goats, one chosen for sacrifice, the other chosen to remain alive. The second goat is not a sacrificial goat: it is not killed; its blood is not applied to the altar, nor is its flesh burned. To serve its purpose, the scapegoat must remain alive. The living goat is in fact defiled; it does not cleanse, as does a sacrifice. The person who leads the goat away from the tabernacle and camp needs purification because contact with the scapegoat has contaminated him. He needs to launder his garments and bathe before reentering the camp.

There are parallels between the goat in chapter 16 and the use of birds in Leviticus 14:6-7. In this ritual of cleansing, two birds are used. One is slaughtered, and its blood is placed on the living bird and on the person being cleansed. The slaughter of the first bird and the manipulation of its blood do not amount to a sacrificial ritual. The action takes place outside the camp, and the blood is applied to the living bird and the person, not to an altar. The living second bird is sent away into the wilderness, thus eliminating the impurity, and the person becomes clean. For the history of the word scapegoat in Eng., see Dawson. For a discussion of Greek material that supposedly contains a scapegoat and its comparison with Lev 16, see Douglas (121–41). That the sent-away goat is part of an elimination ritual is argued by Wright (8–73) and by Milgrom (1040–45). Kiuchi's arguments are similar (144–59).