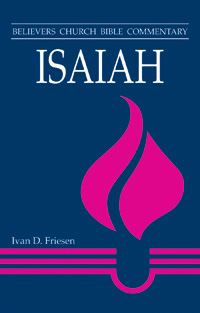 The book of Isaiah was forged in the struggle among empires—Assyrian, Babylonian, and Persian—who won their dominance through military supremacy. Facing the fact of empires, the book offers an alternative perspective on the course of imperial history, on the involvements in that history borne by Israel, and on the divine purpose for both Israel and the empires. In Isaiah the rule of God overwhelms all human empires and the power of militarism, by which they acquire and sustain their sovereignty. Such a religious and political perspective provides a vantage point from which to understand the complexity of warfare within the book of Isaiah.

Isaiah’s stance toward warfare both embraces imperial reality and transcends it. In the eighth century BCE, God’s people faced the Assyrian threat and, in particular, the invasion of Judah by an alliance of Syria and Israel (734–732 BCE) as well as an anti-Assyrian rebellion (713–711 BC). Judean kings Ahaz and Hezekiah were prominent players in those struggles (Isa 7; 36–39).

In the first of these, the war policy of Ephraim-Samaria (Northern Kingdom of Israel) is to cooperate with Damascus in an alliance against Assyria (2 Kings 16; 2 Chron 27–28; Isa 7–12). Yet the Lord has a plan to employ Assyria as a tool of judgment against the pride, the unjust practices, and the covenant disloyalty of God’s people. Even in the face of judgment and the arrogance of Assyrian might, Isaiah counsels, “Do not fear” (7:4). Although it appears that the Lord is “hiding his face from the house of Jacob” (8:17), the Lord also has a subsequent plan to bring down the imperial pride and power of Assyria (10:12; 14:24–27). Even in the midst of these judgments, therefore, God’s people are counseled not to be afraid, for God will do again what God has done for Israel at the exodus (10:24–27).

In the face of Ahaz’s “I can do it myself” approach, Isaiah’s alternative counsel is to trust the Lord (7:4; 12:2), the only God and Sovereign, whose rule brings about the end of imperial power and human pride. Only the Lord’s alternative strategy will bring about the end of warfare by means of a new “imperialism” of justice with righteousness (9:1–7), within which violence will come to an end (11:1–9). So in the face of war, Isaiah counsels trust (baṭaḥ; 12:2; 26:3–4; 30:12; 31:1; 36:4–9, 15; 42:17; 47:10; 50:10). Such a strategy is possible because the Lord’s plan transcends empires and their might. It can be imagined that even Egypt and Assyria might become God’s people (19:23–25). With such a prospect, why “rely on horses or trust in chariots” (31:1)? The particular means by which God will accomplish this defeat of Israel’s enemies is not mentioned by the prophet, perhaps because God’s people need not participate in it.

Similar dynamics appear in the second struggle, the anti-Assyrian rebellion during Hezekiah’s time (Isa 36–39; cf. 2 Kings 18:13–20:19). Sennacherib’s envoy seeks to undermine Hezekiah’s trust in the Lord. Again the term baṭaḥ is important, occurring seven times in Isaiah 36:4–15 and translated “confidence” (noun, NRSV, NIV), rely (verb, NRSV), and “depend, trust” (verb, NIV). The envoy asks, in effect, “Do you think that mere words are strategy and power for war?” (36:5). The claim, of course, is that Isaiah’s counsel is “mere words.” Isaiah says again, “Do not be afraid” (37:6), to which the Assyrian envoy gives the theological retort that Assyria’s military strength is undergirded by its gods. None of the other nations’ gods have ever delivered them! Nevertheless Hezekiah stands firm, asserting that there is only one God, who is sovereign over “all the kingdoms of the earth” (37:16). Again, the Lord issues a verdict against Sennacherib’s pride and war machine (37:23–24); yet the Lord has another plan (37:26). Although Hezekiah’s rash exposure of his treasures to the Babylonians (39:1–8) foreshadows Judah’s defeat by Babylon, it is the Lord’s plan that unfolds and prevails in chapters 40–66.

Isaiah contains no narrative of conquest by Babylon, yet the book addresses the context of Babylonian exile by continuing the same narrative pattern. Isaiah’s alternative in the context of war is “Do not fear” (41:8–13, 14–15; 43:1–4, 5–7; 44:1–5). Isaiah’s alternative embraces a vision of world (imperial) history that is driven, not by the pride of empires and emperors, but by a vision of God’s universal judgment, which will result in a new era of peace and salvation.

Assyrian armies deported Israel’s population. Babylonian armies devastated Jerusalem and deported thousands. To many it seemed that the Assyrian and Babylonian gods must be stronger. Yet in the midst of warfare and its consequences, the book of Isaiah offers a new kind of sovereignty mediated by a king who rules with justice (chaps. 9, 11), and a servant who suffers (Isa 42:1–4; 49:1–6; 50:4–9; 52:13–53:12). Although God is celebrated as a warrior (chap. 63), human warfare is not glorified, nor is it the last word in Isaiah. Although God uses the king of Assyria (Isa 7) and Cyrus the Persian (45:1–6, 13) for his purposes, God also provides comfort in the midst of oppression (40:1; 51:12) and makes possible a new political order in which violence itself is vanquished (chaps. 9, 11). This God is unlike the imperial gods, who undergird the ideology of warfare. For those who think in conventional militaristic categories, the Lord’s ways remain hidden (40:27; 45:15; 49:14; 44:8; 55:8). Yet God, beyond all human imagining, wants to do a new thing (42:5–9; 43:19; 48:6) by introducing a new kind of politics and a new kind of power. God’s purpose and plan come to fruition, says Isaiah, in the full end of warfare and its terrors (2:2–4; 43:16–19).

There are at least three ways in which the book of Isaiah speaks of warfare. (1) Some texts speak of God/the Lord as a “warrior.” The most common name for God in Isaiah is “LORD of hosts” (i.e., armies). This identification occurs fifty-eight times in the book of Isaiah (out of 245 times in the Old Testament). The predominance of this name serves to highlight the sovereignty of God over all creation and all human warfare. This is most clearly seen in Isaiah 42:13, but it is also evident in 13:3–4, where the Lord musters an army against Babylon (cf. 19:2). The Lord acts as warrior against Assyria (30:27–33) and Edom (chap. 34). The Lord acts as warrior against his own people (63:10) but also on their behalf (31:1–5). Isaiah’s warfare theology (clearly articulated in 31:1–5) depends on the paradigm of warfare presented in the book of Exodus: it is not human combat with God’s help, but God’s help alone, rendering human combat unnecessary (Lind: 1980).

(2) Other texts in Isaiah speak of warfare simply as a fact of reality rather than judging it from an ethical perspective. The soldier, for example, is mentioned among other leadership roles in Judean society (3:2). Battlefield conditions are known to produce stress (21:15). The Assyrian field commander (Rabshakeh) speaks of the strategy of war (36:5). Warfare is described in a matter-of-fact way as a part of reality (20:1).

(3) Still others offer a negative reflection on the practice of war. For example, in Isaiah 2:2–4 is the vision of an end to war and an end to the preparation for war. The prophet Isaiah addresses the threat of war with a call to stand firm in faith rather than taking up arms (7:1–9; cf. 41:11–13). The theology here is one in which warfare is understood as lacking the power to produce the desired effect. Judah’s search for military solutions is understood as faithlessness (30:15–17), and human fighting is understood to be counterproductive.

The book of Isaiah includes broad evidence, therefore, that warfare is not part of God’s ultimate plan for humankind. The faith that mobilizes Isaiah is a trust in God that eschews sword and military academy (2:4). “Hold firmly to Yahweh,” Berrigan (37) paraphrases Isaiah 7:9; “no other lifeline will hold.” The book of Isaiah does not encourage the participation of God’s people in war.

In the New Testament, where Jesus embodies the theological and political stance of Isaiah’s “servant,” God remains the cosmic Lord, who asserts his sovereignty over every empire that trumpets itself as universal (Rev 13) and every emperor who heralds himself as lord and savior (Luke 4:1–14; 22:25). The prophetic vision of eschatological peace, Jesus’ embodiment of love of enemy (Matt 5:43–48; Luke 23:34), Paul’s assertion that the dividing walls of hostility have been brought down in God’s new era (Eph 2:14), John’s affirmation that love is the true test of God’s presence in people (1 John 2:5), and the conquest of evil in the book of Revelation by the death of the Lamb that was slain (Rev 17:14)—all these point to God’s rejection of human warfare, to God’s determination to do a new thing, and to God’s inviting our participation in that newness by taking the path of peace even when nations plan otherwise.

In much, though not all, of its history, the church has incorporated war and military service into its belief system (cf. CCW: 5–10). Isaiah’s witness encourages us to acknowledge that although empires will always wage war, God’s purpose is for all people to “beat their swords into plowshares” and to stop preparing for war (2:4). By acknowledging God’s universal empire, human empires are overwhelmed as all people become “the work of my hands” (19:25).