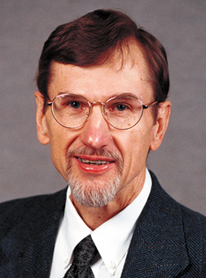 Willard Swartley was professor emeritus at Anabaptist Mennonite Biblical Seminary in Elkhart, Indiana. He joined the faculty at AMBS in 1978 and continued teaching until 2004. He served as academic dean there for seven years (1979-1981; 1995-2001).

Willard was the youngest in a family of eight children growing up on a farm near the Delaware River on the rolling hills of Bucks County, Pennsylvania. He was a graduate of Eastern Mennonite University, Goshen Biblical Seminary, and Princeton Theological Seminary where he received a PhD in 1973.

While he was in seminary, Willard became pastor and was ordained at Locust Grove Mennonite Church in Elkhart. He served the church in many capacities over the years, leading seminars at church-wide conventions, serving on special study committees, and teaching in congregational settings.

Willard and his wife, Mary, were actively involved in the Belmont Mennonite Church, Elkhart, Indiana, and are the parents of Louisa Swartley Oyer and Kenton Swartley, and grandparents of John and Michael Oyer, and Kristen, Jeremy, Libby, and Michelle Swartley. He passed away in November 2019.