Difference between revisions of "Women in John" 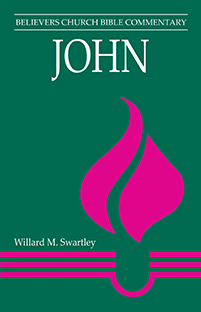 Two extensive contributions merit consideration. Conway undertakes a careful study of ten characters in John: five women and five men. These ten characters are the mother of Jesus, Nicodemus, the Samaritan woman, the man born blind, Martha and Mary of Bethany, Pilate, Simon Peter, the beloved disciple, and Mary Magdalene. Conway rightly critiques much of the earlier work on women in John that tries to prove that women are equal to men in narrative roles and importance. Conway says, “Gender analysis does not simply equal the study of women.” Rather, “the term gender signifies, among other things, the relational aspect of the categories ‘male’ and ‘female’” (48). Conway emphasizes “the network of meaning created in and between the presentation of characters” (126-170).

Nowhere else in the Gospel does an individual character’s confession conclude a conversation the way that Martha’s does. The confessions of Nathanael (1:49), Peter (6:69), and Thomas (20:28) are followed by some sort of reprimand by Jesus, and the profession of faith by the formerly blind man (9:38) is followed by a judgment from Jesus. In contrast, Martha’s confession stands on its own. The only other place where this occurs is 4:42, where the Samaritan villagers declare Jesus “Savior of the World.” (143)

Martha’s confession extends that of the Samaritan woman’s villagers. These blend with the later confession of Mary Magdalene in 20:18, I have seen the Lord. Each occurs in the concluding chapters of the Gospel’s three main structural divisions (chs. 1–4; 5:1–12:8 [Mary’s anointing of Jesus complements Martha’s confession]; and chs. 12:9–20:31). These women’s confessions are crucial to Jesus’ christological identity. The anointing of Jesus by Mary of Bethany as devotion to him, along with Mary Magdalene’s role in 20:1-18, bookend the third division. This structural pattern likely reflects the prominence of women in leadership among the Johannine believers.

Conway’s presentation and profile of the mother of Jesus excel, and so does her portrait of the Samaritan woman, which concludes: “As the mother of Jesus is the co-worker of God the Father, so the Samaritan woman becomes an ‘indispensable co-worker’ of Jesus” (125). Her treatment of all ten characters is a rich feast in both the mimetic and functional aspects of characterization. Puzzling, however, is why in her brief conclusion (201–5) she does not correlate more explicitly and fully her contribution with key Gospel emphases—especially Christology and the structure of the narrative, which she earlier affirmed in Baruch Hochman’s work (Conway: 55–57; Hochman: 41–42). She might have said more on the positive roles of the women in relation to the structure of the Gospel, as noted above.

Conway concludes that all five women (see above) “are presented in incomparably positive ways as persons who are closely linked to the self-revelation of Jesus and to the coming of his hour” (203). In contrast to these five women—whose identity as female is not coincidental—the men are portrayed more negatively. Only two, the blind man and the beloved disciple, are presented positively. Conway considers whether female and male characters are intentionally developed in comparison: “Nicodemus with the Samaritan woman, Mary of Bethany with Judas, Mary Magdalene with the beloved disciple, and perhaps Martha with Peter” (203). Had she included chapter 21 in her analysis, Peter would be more positive, hardly a contrast to Martha.

Most important, women play key roles as characters that bring each of John’s three structural divisions to a climax: chapters 1–4; 5:1–12:8; and 12:9–20:31). The mother of Jesus, who bookends Jesus’ ministry, is not compared readily with any other narrative character, unless perhaps the Father who directs Jesus’ ministry. With the prominence of women’s roles in John, as well as in Mark (Swartley 1997), the function of women in leadership roles in early Christianity merits further study. In John, women hear, see, believe, confess, witness, and even proclaim (Mary Magdalene) as exemplars.w2