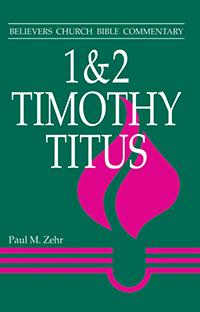 In contrast to Paul’s earlier writings, the phrase “body of Christ” is not used in the letters to Timothy and Titus (Rom 12:4-5; 1 Cor 12:12-27; Eph 2:16; 4:4, 12-16; 5:30). The gifts of the Holy Spirit in the body of Christ, as seen in the Corinthian church and in Ephesians 4:11-16, are not emphasized in the letters to Timothy and Titus, except for the gift given to Timothy for Christian ministry (1 Tim 4:14; 2 Tim 1:6). Noting the emphasis on church organization, household behavior, and how to relate to the social and cultural context, some scholars conclude that the letters to Timothy and Titus fit a setting similar to the letters of Ignatius in the second century (ca. 115). The adjustment of the church to live within its historical and cultural setting is further enhanced by the use of the term household of God (1 Tim 3:5; 15; cf. 2 Tim 2:20-21). However, Paul used two of these office titles (bishop and deacon) in his earlier epistles. So the assumption of a clean, linear progression in ecclesiology from charismatic leadership to hierarchical leadership should not be imposed upon the text. The concept of the church as household of God also occurs in Ephesians and Galatians (1 Cor 4:1-2; Gal 6:10; Eph 2:19-22). Furthermore, Paul and Peter use the term “people of God” (cf. Titus 2:14) for the church (Rom 9:25-26; 1 Pet 2:9-10).

By the time 1 Timothy was written, the Ephesian church had been in existence for some years. Leaders of the church are to be upright in moral behavior and able to teach sound doctrine. In Titus, the church is in its early stages of development, and elders need to be chosen to provide leadership for the new house fellowships of believers. The church is taking root in these new house fellowships, and new leaders are to guide new Christians in godly ways. In 2 Timothy, the leader of the church is to be dedicated and useful to the owner of the house. The idea of “house” is more in keeping with the Jewish tabernacle and temple than with the Greco-Roman household.

Paul uses the term household of God (1 Tim 3:15) as a way to communicate the gospel cross-culturally. On the one hand, the term picks up the idea of God’s dwelling with his people in the ancient tabernacle and temple. Jesus called the temple “the house of God” (Mark 2:26; 11:17). Paul refers to the church as “God’s building” and “God’s temple” (1 Cor 3:9, 16), “the household of God” (Eph 2:19), “a holy temple in the Lord” (2:21), and “a dwelling place for God” (2:22). And in 1 Timothy 3:15, Paul calls this household the church of the living God. In the NT, the house is where church happens. The NT repeatedly talks about the church in someone’s house (Rom 16:5; 1 Cor 16:19; Col 4:15; Philem 2). On the other hand, in the letters to Timothy and Titus, household of God recalls the household as a social unit within Hellenistic society. These households had a definite structure, as seen in the household codes of behavior. Household management was largely in the hands of the paterfamilias. When Paul talks about desired qualities in church leaders, one major concern is that the person chosen for bishop is to be a good household manager (1 Tim 3:4-5), and the persons chosen as deacons must manage their children and households well (3:12). In 2 Timothy 3:6, Timothy is warned about unhealthy teachers disturbing Christian households. Titus is to warn those who subvert whole households by teaching for financial gain (Titus 1:11). Church leaders are to exercise self-discipline.

Because the author of the letters to Timothy and Titus uses household language that is familiar in the Greco-Roman society, some NT scholars think Paul is affirming a new pattern of church order and offices for church structure as the church accommodates itself to living within the society around it. But this view is questionable. Witherington says, “It is simply incorrect to say that we have in the Pastorals a mere baptizing of the status quo of a bourgeois Greco-Roman ethic and calling of it good” (2006: 114). When Paul talks about the household of God, he is more likely speaking of God’s dwelling in the church by combining the temple idea with the household idea, thus describing Christian truth in language that the Greco-Roman world could understand. The church as household of God has structure, with the bishop and elders giving leadership to the household of faith. But its foundation is the temple, the dwelling of God. Christian teaching is recast into language that is intelligible in the Hellenistic world. Because the church assembles in households, there are no lines between public and private, or between domestic and ecclesial. As non-Christians observe the conduct of Christians, they perceive that Christianity is not completely overturning traditional social and domestic values. The instructions that Paul gives have a larger agenda in mind: he wants to build bridges between the Christian culture and the larger society that will assist the church to win the battles it deems essential (de Silva: 749-50). The idea that church order is the main emphasis in the letters to Timothy and Titus is also questionable. An organized church is emphasized, but details of the leaders’ duties and functions are not stated. The right people are to be chosen as leaders, and these qualified leaders are to teach sound doctrine. Women also were involved in teaching. Action is to be taken against opponents of the true gospel. But the organizational structure in the letters to Timothy and Titus does not resemble the more rigid structure that we see in Ignatius’s letters. It comes closer to the synagogue structure of Diaspora Judaism, which in turn resembles that in the Greco-Roman collegia (Johnson 2001: 75). As noted above, two of the three titles that Paul uses for church leaders in 1 Timothy and Titus also appear in the undisputed letters of Paul (Rom 16:1; Phil 1:1).

Church structure in the letters to Timothy and Titus is much looser and less official than some scholars imply. In light of the dangers of deviant teaching, the church is closely associated with the gospel and is the guardian of the true message of salvation. This message is contained in the teaching handed down by Paul and ultimately rests on Scripture. It requires that faithful people in the congregation teach it and take action against those who pervert it. The stress on “office” and “order” must be seen in its context. When this is done, the ecclesiology of the letters to Timothy and Titus emerges as being more akin to that reflected in Paul’s other letters (I. H. Marshall 1999: 521). (Cf. I. H. Marshall 1999: 512-21; Collins: 102-6; Johnson 2001: 74-76; de Silva: 748-56.)