This page, currently under construction, focuses on 1) formal Interchurch Dialogue between Mennonites and other Christian denominations, 2) Local and grassroots ecumenical initiatives in Mennonite communities, and 3) a bibliography of books, articles, and other publications related to Anabaptists in ecumenical conversation. Some expressions of Mennonite ecumenicity have emerged in response to formal invitations from other Christian groups seeking a "healing of memory" in light of the conflict that surrounded our origins in the 16th century. Other ecumenical engagements have been more informal--lay initiatives seeking deeper understanding and reconciliation at a local level. The page also provides access to bibliographic information on Anabaptist-Mennonite ecumenical involvements, texts of working papers and formal statements, an overview of the emerging reception history and links to other resources. Please add additional relevant information based on your own interest and expertise!

Representatives of the Mennonite Church USA (MCUSA) and the Evangelical Lutheran Church in America (ELCA) met in Goshen, Indiana February 21-24, 2002, beginning the first in a series of dialogues between the two denominations. Included in this round of conversation were reflections upon the Protestant Reformation, the experience of each church in the North American context, and the role and authority of confessional writings. A key element in the dialogue was an examination of the persecution of Anabaptists by Lutherans and others, and the healing of those painful memories. In the course of this first round, the dialogue explored each church’s hermeneutic for interpreting Scripture, the role and authority of Church structures, and the relationship between Church and state.

From February of 2002 until March of 2004, topics included baptism, the Lord’s Supper, nonresistance and non-violence, pacifism and the Gospel of peace, anthropology and free will, and others. Throughout the dialogue, members of congregations were given opportunities to meet with and discuss these issues as the group sought to deepen levels of trust and cooperation between our two church bodies. Their continued hope is that our deepening fellowship will strengthen both faith communities for mission in the world.[3] 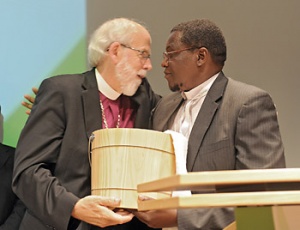 On July 22, 2010, at the Eleventh Assembly of the Lutheran World Federation (LWF) in Stuttgart, Germany, Lutherans formally asked for forgiveness for the 16th-century persecution of Anabaptists. The Assembly unanimously approved a statement expressing remorse, requesting forgiveness, and setting commitments for the future of Mennonite-Lutheran relations. “We remember how Anabaptist Christians knew suffering and persecution, and we remember how some of our most honored Reformation leaders defended this persecution in the name of faithfulness,” said Bishop Mark Hanson, president of the Lutheran World Federation.[4] Representatives from Mennonite World Conference (MWC) were present at the service, which included comments by Danisa Ndlovu, MWC President.

The formal meetings, papers, and statements shared by Mennonite and Lutheran denominational leaders and scholars have had reverberations in local settings throughout the Mennonite and Lutheran worlds. In the wake of the Eleventh Lutheran World Federation Assembly's request for forgiveness in 2010, for example, Mennonites and Lutherans have gathered together for symbolic acts of reconciliation and ongoing dialogue in various places across the United States and Europe.

"A dialogue between Catholics and Mennonites took place over a five-year period, from 1998-2003. The general purpose of the dialogue was to get better acquainted, to better understand Catholic and Mennonite positions on Christian faith and to contribute to overcoming long-held prejudices.

Under discussion were the intersection of the history of the two denominations; theology around the nature of the church, sacraments and ordinances and the commitment to peace; and addressing the healing of memories."[5]

The Heritage of the First and Radical Reformations (Prague I, 1986)

The Significance of Reforming and Prophetic Movements for Church and Society (Prague VII, 2003)

Representatives from Mennonite World Conference met with leaders of the General Conference of Seventh Day Adventists on June 28-July 1, 2011, at the Adventists' world headquarters in Silver Spring, Maryland. The four day conference was the first formal dialogue between the two church bodies, and focused on the theme of "Living a Christian Life in Today's World." Presentations on the history of each group preceded a series of dialogues on peace and military service; discipleship and non-conformity; health and ecology; and the nature and mission of the church.[6] At the conclusion of the conference, the two church groups issued a joint statement (.pdf) reporting on the dialogues and stating commonalities as well as shared challenges among the denominations.

A second round of dialogues took place at the Bienenberg Study and Conference Centre in Liestal, Switzerland on May 28-30, 2012. Representatives from MWC and SDA discussed the meaning and practices of Sabbath, Worship, Eschatology, and Biblical Interpretation.[7]

Baptism, Peace, and the State in the Reformed and Mennonite Traditions

Dialogue Between the Swiss Reformed Church and the Swiss Mennonite Church

"Bridgefolk is a movement of sacramentally-minded Mennonites and peace-minded Roman Catholics who come together to celebrate each other's traditions, explore each other's practices, and honor each other's contribution to the mission of Christ's Church. Together we seek better ways to embody a commitment to both traditions. We seek to make Anabaptist-Mennonite practices of discipleship, peaceableness, and lay participation more accessible to Roman Catholics, and to bring the spiritual, liturgical, and sacramental practices of the Catholic tradition to Anabaptists." (Excerpt taken from the official Bridgefolk website.)

"From May 1-4, 2003, in a conference center at Winterthur, in the mountains of Switzerland, over 1000 Christians from all over the world met to joyfully worship, prayerfully seek and faithfully obey the God who heals our land by healing our broken relationships. This “Heal Our Land” conference was sponsored by the Stiftung Schleife, a Christian ministry devoted to serving the body of Christ and headed by Geri Keller, a Swiss Reformed minister." (Excerpt taken from "Come, Father, Heal Our Land.")

"A Swiss Reformed pastor for thirty years has carried a burden for reconciliation between these two groups. Geri Keller, founder of a parachurch ministry called Stiftung Schleife, organized the conference. There were many Anabaptists who attended from Switzerland, Germany, France, Austria, Belgium and other parts of Europe, as well as Canada. The Swiss Reformed church was represented by approximately forty Reformed pastors and many lay people, who joined together for the four-day conference. Forty Amish from Montana and Idaho and seventeen Mennonites from the Lancaster and Franconia, PA areas were invited to participate in the conference. My wife Janet and I attended, representing Mennonites from the Franconia Mennonite Conference area. The total number of persons attending the conference exceeded 800." (Excerpt taken from "500-Year Old Swiss Wound Had to be Healed.")

Swiss Reformed pastors and leaders met together with Anabaptists from all denominations, April 7-9, 2005 in New Holland, Pa.

"Unification of all believers in Jesus Christ was a theme of the opening session of a three-day conference titled “Unlocking the Inheritance.’’ Despite differences, Hoover said, all in attendance are united in Christ.

Forgiveness and healing were related themes. The Swiss traveled here to ask for forgiveness from Mennonites, Amish, Brethren and other Anabaptists and to heal relationships with them." (Excerpt taken from "Going about the Business of Forgiveness.")

Ecumenical Gatherings in Germany and Switzerland

Grassroots ecumenical activity between Mennonites and other Christian groups is ongoing in Germany and Switzerland, notably in the work of Mennonites in ecumenical organizations like Church and Peace, and also in the public programming of the Arbeitsstelle Theologie Der Friedenskirche (Center for Peace Church Theology) at the University of Hamburg, led by Fernando Enns, a scholar specializing in Mennonite ecumenical activity and theology. Representatives of Mennonite World Conference have also participated in ecumenical gatherings in Germany and Switzerland.

Clearly this a draft in progress! Please enter additional citations or send them to johndr@goshen.edu.