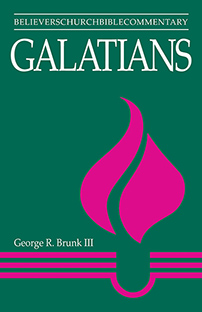 Since the Reformation, the letter of the apostle Paul to the Galatians has been the special domain of mainline Protestant groups which emphasize justification by faith apart from works. The Radical Reformation and its progeny have not given Galatians as high a profile because of this tradition’s concern for the questions of conversion and new life (discipleship). However, recent study of the letter has identified prominent themes beyond those associated with classical Protestantism, thus making Galatians more relevant to the broader Christian family and its wider range of interests and concerns.

These recent developments touch especially on the areas of ethics and ecclesiology. In the letter, Paul places the theme of identification with Christ (2:20; 3:27-28; 4:19) alongside justification (2:16) in a way that emphasizes both right relationship with God (justification) and moral formation in the likeness of Jesus Christ. All of life is made new in Christ as a “new creation” (6:15) Along with this life changing identification with Christ is the complementary emphasis on the Spirit’s empowering for righteous living (3:1-5; 5:16-26). The power of sin can be overcome only in the counter power of the Spirit. The Law of Moses, still valid as the revelation of God, must be interpreted and used in subordination to Christ and the Spirit. Moreover, a careful reading of Galatians discloses a strong vision of the community of faith, the church. To be incorporated into Christ is to be incorporated with all who are in Christ (3:26-29). Where there is the Messiah there is a messianic people. Christian life is family life as a child of God, the Father (4:5-7). The practical teaching for faithful living in chapter 5 and 6 gives major focus to virtues and practices that build and maintain community.

The most certain fact about the background of Galatians is that Paul, the apostle, is its author. The letter claims such (1:1), but it also reflects in stark terms the distinctive viewpoint of the Paul known in other sources. The deeply personal dimension of its style speaks of its authenticity. The large number of autobiographical references help to verify its author. On the other hand, the questions of addressees and date of origin are disputed. The geographical term, Galatia, is ambiguous since it can refer either to a region in north central Asia Minor or to a larger Roman province in Asia Minor. The latter province included most of the cities in Paul’s first missionary journey in southern Asia Minor (Acts 13-14). The other area, the region, is likely the one mentioned in Paul’s second missionary journey but lacking any description of churches being founded there (Acts 16:6). Consequently, scholars differ about whether a “North Galatia” or a “South Galatia” theory best fits the letter and identifies its recipients. There is some recent tendency in the English-speaking world to prefer the “South Galatia” view, although the “North Galatia” view has been strongest in the longer tradition.

The uncertainty about the addressees is then reflected in the date of writing. On a “South Galatia” assumption, the date could be in the late 40’s or the early 50’s C.E., while the “North Galatia” view would require a date of writing in the middle 50’s C.E. The significance of date of origin is that, on any theory, Galatians is one of the earliest New Testament writings, pre-dated likely by 1 Thessalonians alone. To read Galatians is to sense the spiritual pulse and to overhear the theological debates of the first twenty years of the Jesus movement. To observe a high level of theological development already at this early stage is cause for some amazement and reassurance that we have access to the impact that the person of Jesus, his life, death, and resurrection, made on his first followers.

The reader of Galatian will readily recognize the form of a letter with its introduction and conclusion containing all the usual formal features of a Greco-Roman letter. At the same time, Paul adapts the form to serve his own purposes, reflecting the language and concepts of early believers. More striking to students of the letter is the way Paul uses the full range of rhetorical styles to persuade his audience. He appeals to logic (theological argument), to personal reputation (autobiographical story), and to emotion (appeal to relational and experiential sentiment). Paul uses a mix of classical rhetorical forms of his time to defend, correct, and exhort the Galatian churches.

The common practice is to identify a three-part structure of the letter: autobiographical narrative (chs. 1-2); theological argument (chs. 3-4); practical teaching (chs. 5-6). However, the clean separation of the theoretical and the practical that this implies breaks down at multiple points and weakens the coherence of Paul’s argument. More helpful is the observation that the language of rebuke (indicative verbs) marks the section from 1:6 to 4:11, while the language of request (imperative verbs) marks the section from 4:12 to 6:10. Within this general structure Paul can freely exploit the range of rhetorical styles identified above. The following outline builds on this assumption.

In Galatians, Paul intends to correct what he sees as a problem. The correction takes the form of rebuke and of request. The entire letter falls into two clear parts that correspond to the rebuke-and-request style. (See the Introduction for further comments about this structure.) The rebuke section is signaled by its opening words in 1:6, I am astonished. It continues with Paul’s defense of a position contrary to the teaching that is being offered to the Galatian believers and is at least partly being accepted by them. The defense of the truth of the gospel (2:5, 14) is the unifying focus. The request section begins in 4:12 with the first appearance of an imperative verb in the letter. Thereafter, imperatives are numerous. These exhortations share the aim of assisting the readers in obeying the truth (5:7). The structure of the letter reveals a balance of the theoretical and the practical in each of the two parts. The rebuke section is a sustained theological argument that also addresses the ethical implications of right belief. The request section is a focused treatment of ethical dynamics in faithful living, grounded in theological principles.

The rebuke section begins with a statement of the issue. However, this statement reveals more about the depth of Paul’s concern than it does about the nature of the problem itself. There follows a defense in two parts. The first (1:11–2:21) is a defense of the divine origin of the gospel that Paul preaches and of his authority as an apostle representing that gospel. The second (3:1–4:11) is a defense of the gospel as the true fulfillment of God’s revelation to Israel. In the first part of this defense, Paul claims that the revelation he received from God in Christ makes his commission from God essentially independent of other leaders in the church. But lest the Galatians think that Paul’s essential independence represents a break with God’s revelation to Israel, the second part of the defense argues that the new revelation continues the truth of the former revelation. It does this by fulfilling the promises in the tradition and by respecting its fundamental principle of faith. As a new revelation and a new act of God in history, both discontinuity and continuity are essential in a right understanding of God’s action in the past and present.

The paragraph in 3:1–5 is the key to understanding the problem lying behind the epistle. The Galatian believers are, according to Paul’s understanding, leaving a faith-based gospel for a law-based one. The former lives out of the Spirit; the latter lives out of the flesh. The larger emphasis throughout part 1 is that the opening of the gospel to all people (Jew and Gentile) signifies that the law-oriented way of living out the Mosaic Law can be no basis for a universal gospel for all people. Christ’s work makes Christ and the Spirit, not the Law, the key to righteousness. The Galatians should reject anything that is inconsistent with this new revelation. Circumcision, which maintains a boundary between Jew and Gentile, is the leading example in the letter. (Brunk, Galatians, 41–42)

Up to this point in Galatians, Paul has given a reasoned defense of his position, which counters that of the opponents. Paul does not shrink from direct rebuke, as 1:6 and 3:1–5 make clear. But with 4:12, Paul assumes a new rhetorical form, the form of request. Imperative verbs mark this form. The command Become as I am (4:12) is the first real imperative of the letter. (The imperatives in 1:8–9 are not directed to the Galatians, and the possible imperative in 3:7, which NRSV translates as an indicative, you see, is in any case a stylistic feature of narrative.) The key motif for this entire section is obeying the truth (5:7). Here Paul beings to focus questions of conduct (ethics) without losing sight of the theological underpinnings in the first part of the letter.

Paul begins this section by appealing to his personal relationship with the Galatians. He follows this up with another extended argument from Scripture that culminates in a call to action against the false teachers. After appealing directly to his readers to maintain their position in freedom, Paul explains how right living is based on the resources of the gospel rather than on the Law. The leading themes are freedom, flesh, Spirit, and Law. Paul has introduced them earlier in the letter but now applies them to the underlying question about how a faith-centered gospel leads to holy and righteous living if it does not appeal to the demands of the Law. Paul’s response is that the Spirit is the key. The Spirit makes upright living achievable in a way that is impossible for the Law. The Spirit goes beyond the Law even as it fulfills the basic spirit of the Law, which is love. (Brunk, Galatians, 205)

Paul’s letter to the Galatians is of particular importance in relation to the hermeneutical role it plays within the canon of scripture. Galatians is the first expression of an attempt to understand salvation history and its sacred scriptures (known to us as the Old Testament) in the light of the person and work of Jesus as Israel’s Messiah. In Jesus, the aspirations of the older revelation in the Law and the Prophets reach their climax and fulfillment. As a result, there are new priorities and new resources determined by the work of Christ and the gift of the Spirit. These are the new norm. The Law of Moses is de-centered, but not discarded. The major effects for Paul are a move from a national people of God to a family from all peoples, and from a legal-centered way of life to life in the Spirit. There is, however, a reverse sense of the hermeneutical place of Galatians. The letter is responding to a specific situation in Galatia of which we know only the surface features. Its polemical character means that it reflects a particular dimension of truth to make its point, but does not aspire to complete balance. Therefore, an interpretation of Galatians needs the rest of Paul’s writings and, indeed, the whole of scripture in order to be properly understood and received as authority for the church.

Faith of Jesus Christ
Paul's View of the Law