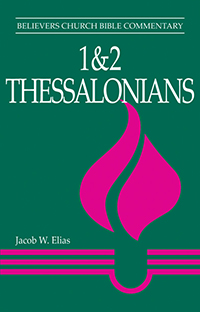 Interpreters of 1 and 2 Thessalonians have long noticed that these letters are remarkably similar and yet quite different. Great similarities exist between the two letters, both in words, phrases, and concepts, as well as in their structure, which differs in some respects from the standard Pauline letter form. Yet 2 Thessalonians seems to be less personal and intimate than 1 Thessalonians, and it has been seen as teaching a different eschatology. How then does one explain both the major linguistic and structural similarities and the differences in tone and content?

A previous letter is mentioned in several places in 2 Thessalonians. According to 2:1­2, some upsetting eschatological teaching was being conveyed either by spirit or by word or by letter, as though from us. Is this letter 1 Thessalonians? Or a forged letter written in the name of Paul? Or an indication that 1 Thessalonians was apparently being misinterpreted? The wording of Paul's autograph greeting in 3:17 has been taken to communicate a concern to assure the Thessalonians of the authenticity of this letter. Why was this concern expressed in the second letter and not in the first? Some interpreters read this as an indication that 2 Thessalonians was pseudonymous. In 2:15 the writers exhort the Thessalonians: Stand firm and observe the traditions which you were taught either by our word or by our letter. A similar reference in 3:14 (usually translated this letter) can be read to refer either to a previous letter (1 Thessalonians) or to the letter being written (2 Thessalonians).

The most plausible reading of these references, as argued in the Explanatory Notes for these texts, is that the letter mentioned in 2 Thess. 2:2, 15; 3:14 is 1 Thessalonians. In 2:2 the qualifying phrase as though from us suggests that Paul found the claim that the day of the Lord has come so disturbing that he even considers the possibility that another letter has been circulating in his name (Jewett, 1986:181­-186).

Scholars have also made several other proposals for resolving the puzzling question of the relationship between these letters. We examine three of these hypotheses briefly (summarized from Jewett, 1986: chaps. 1­3; Best: 7­59): separate recipients, reversed sequence, pseudonymity of 2 Thessalonians.

Reversed sequence of these letters has recently been proposed by Charles Wanamaker: 2 Thessalonians preceded 1 Thessalonians (Wanamaker: 37­45). Since canonical order of the NT books is not based on chronological order, the present order in the NT does not rule out this hypothesis. But what is the evidence? We name a few arguments for 2 Thessalonians being written first and some counterarguments (chart below).

All things considered, the arguments for 2 Thessalonians being written first are not persuasive. There are strong reasons for believing that indeed 1 Thessalonians came first, and the reasons include references in 2 Thessalonians to a previous letter (see above). The story about how Paul and his companions went about their ministry and how they were welcomed in Thessalonica seems appropriate in a first letter (1 Thess. 1:5­-10; 2:1-­12). A reference to the growth of the Thessalonian congregation (2 Thess. 1:3­-4) fits quite naturally in a sequel.

The pseudonymity of 2 Thessalonians is another explanation for the combination of striking similarities and major differences between 1 and 2 Thessalonians. This proposal has gained widespread academic support. A survey of articles given at a 1988 colloquium dealing with the Thessalonian correspondence reveals that among scholars, the advocates of Pauline authorship of 2 Thessalonians are definitely in the minority (Collins, 1990).

According to an increasingly dominant view, 2 Thessalonians was not written by Paul. Some scholars suggest a date shortly after Paul's death, when the destruction of Jerusalem and the temple elicited apocalyptic excitement and the setting of dates; this letter was written to defuse such eschatological enthusiasm (Beker, 1991:80-­83). Other scholars, notably Wilhelm Wrede, propose that a writer around A.D. 100 wrote 2 Thessalonians in Paul's name to oppose the notion, which seemed to be rooted in the eschatology of 1 Thessalonians, that the parousia had already occurred (Wrede's position summarized by Jewett, 1986:5-­10).

As indicated in the introduction ("Who Wrote These Letters?" p. 25), the present commentary is based on the premise that Paul, Silvanus, and Timothy were coauthors of both 1 and 2 Thessalonians, with Paul having the primary hand in writing these letters. Complete certainty about such matters may not be possible, and so the debate continues. To introduce some of the issues, we enumerate several arguments and counterarguments regarding pseudonymity and Pauline authorship (chart below).

In sum, the arguments favoring pseudonymous authorship are not convincing. All of the real or perceived differences between the two letters (vocabulary and style, tone, form, theology, and eschatology) can be interpreted in light of the situation which developed in Thessalonica. This included heightened persecution, misleading eschatological teachings, and the irresponsible lifestyle of the unruly.

Another variable may have been the role of an amanuensis or secretary in writing these letters. It is evident from Paul's letters that he employed the services of an amanuensis, either to take direct dictation or to actually draft the letter based on written or oral instructions. Depending on the level of freedom given the amanuensis for this assignment, that secretary could have shaped the vocabulary, style, and even content of the letter to a signficant extent (Richards). In the case of 1 and 2 Thessalonians, of course, one or both of the coauthors with Paul could have drafted one or the other of these letters. For more discussion of the relationship between 1 and 2 Thessalonians, including the question of the authorship of 2 Thessalonians, see Jewett, 1986:3­-46, 181­-192; Best: 37­-59; Wanamaker: 17­-45; Roetzel: 83­-86, 144-­148; Donfried, 1993:83­-89.